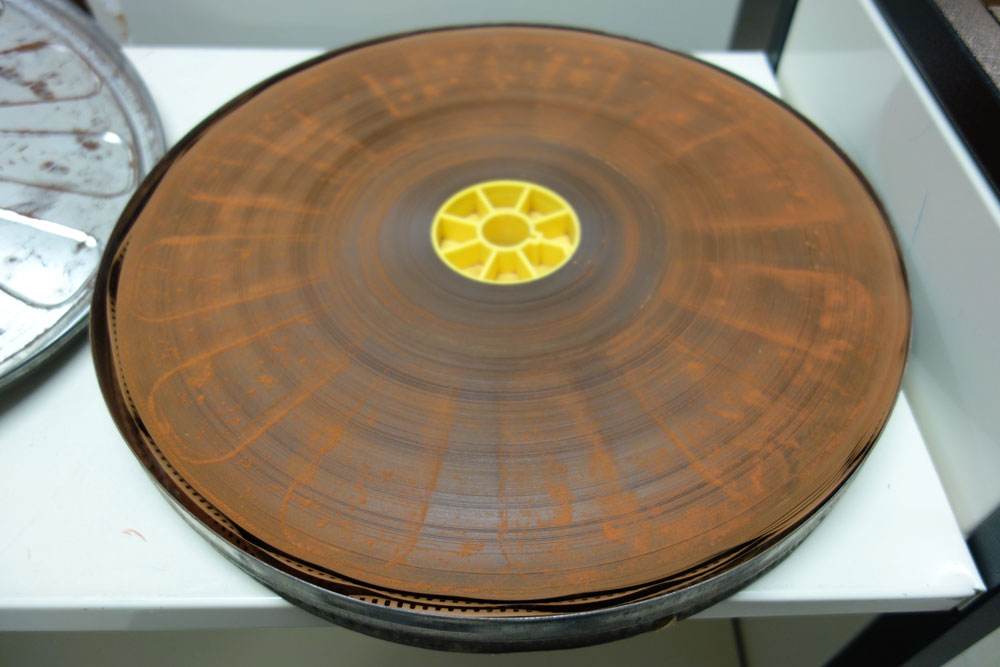 Acetic acid vapour emitted by the deteriorating film reel caused the interior of the film can to corrode, leaving rust on the side of the reel. David Daley photo. 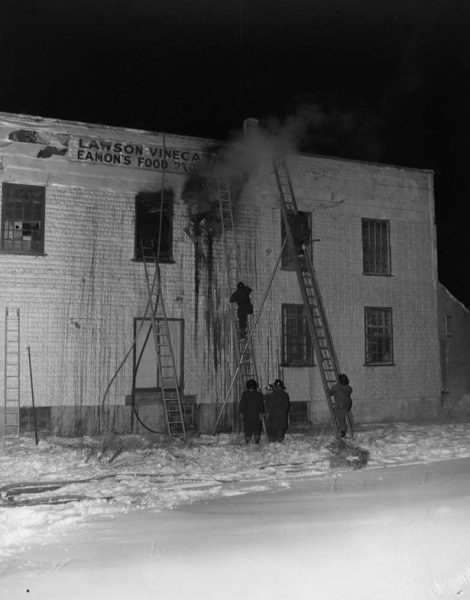 When vinegar is paired with fish and chips, it’s a tantalizing treat, but when it’s paired with film, it’s an indicator of a problem known as “vinegar syndrome.”

While some might see the desire to splash vinegar on fish and chips as a syndrome unto itself, vinegar syndrome in archives is a crucial indicator of acetate film degradation.

Acetate film degradation affects acetate-based film (still and movie) produced between the 1930s and the 1990s. It’s an ongoing problem that every archive with acetate film in its collections has to face.

The Glenbow Library and Archives is no different. The Glenbow has thousands of acetate film reels and negatives in its collections.

When the University of Calgary accepted responsibility for the Glenbow’s archival materials, archives staff realized they needed to understand the condition of these films so they could better care for them.

As cellulose acetate film degrades, it releases acetic acid, which accounts for the sharp vinegar smell.

The high school chemistry sniff test is a quick way to tell if acetate film is degrading. It can also be inaccurate, ineffective and hazardous method to assess the condition of film.

We splash highly diluted vinegar on fish and chips (about four percent acetic acid by volume). Inhaling the full-strength stuff that comes off degrading film, however, can damage internal organs.

Thankfully, archivists and conservators such as Regina Landwehr and David Daley didn’t have to take a good whiff of every film can in the Glenbow’s collection. Instead, they used a litmus strip test for that particular problem, known as A-D strips (acid detection), available from the Image Permanence Institute.

A-D strips change colour when acidic vapour is present. Fresh strips start a deep blue but turn from blue to light green, dark green or yellow, depending on the severity of the degradation.

Other signs of acetate film degradation, along with the vinegar odour, include a shrinking and brittle film base. Tiny crystals or bubbles on the film are another sign, as is a pink or blue colouration (in sheet film primarily).

Acetate film begins to degrade when it is stored in a warm and humid environment. 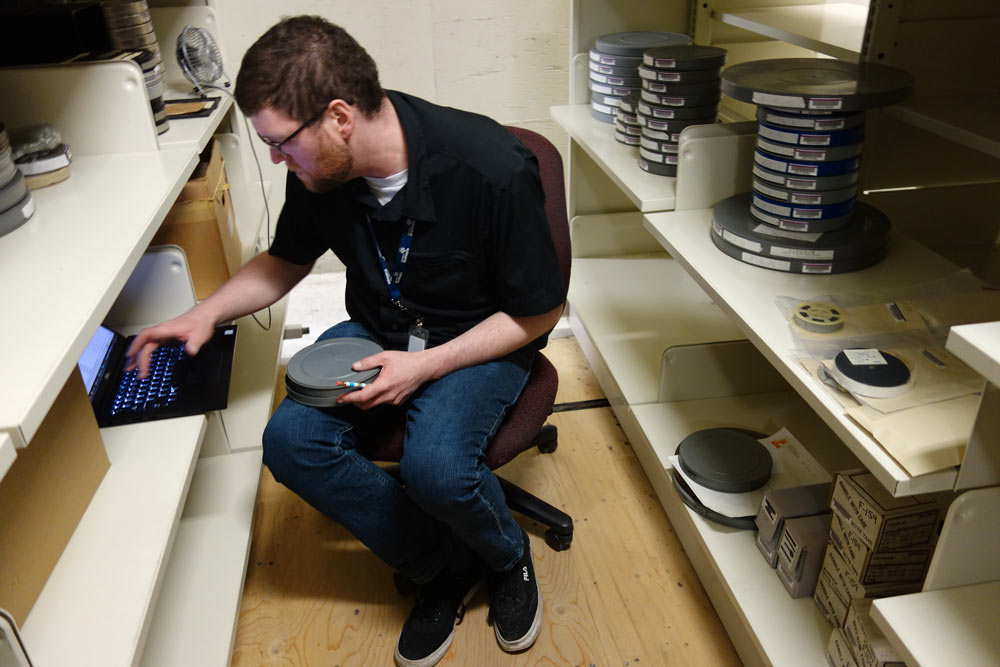 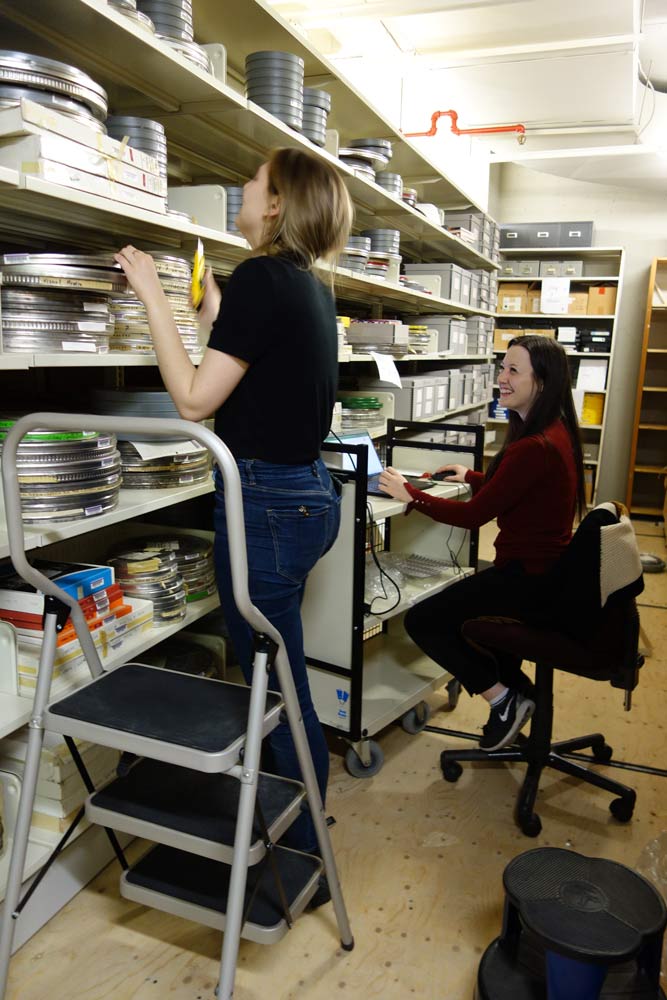 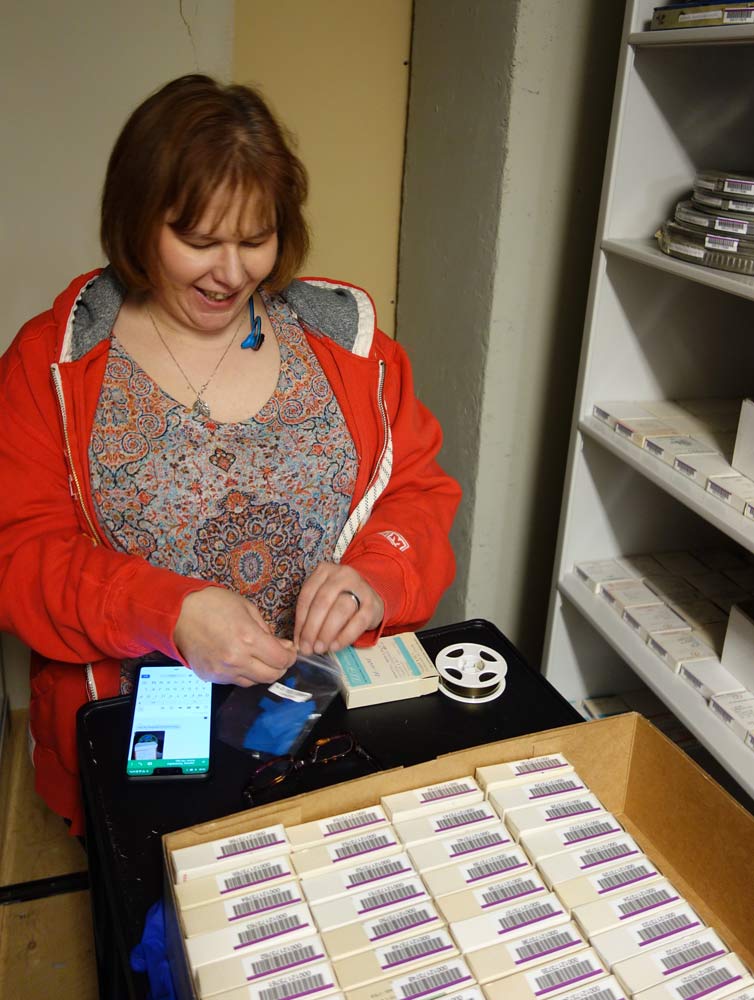 In all, UCalgary tested 2,500 acetate films from the Glenbow collection for vinegar syndrome. And as the acetate film reels are nearing the end of their life, most showed a degree of degradation.

“And that’s what we’re finding with most of the strips that we see. Very few have been the raw blue that we put in the container; most of them were noticeably off-coloured and starting to go. It’s all on its way,” says conservator David Daley.

Larger film reels stored in metal or plastic containers have fared worse than the smaller reels stored in paper boxes. The larger the surface area, combined with air-tight cans, the worse the films do.

“The worst are sealed cans where [vapour] doesn’t have a chance to escape, and that causes an autocatalytic degradation process in which when it stews in its own juices, it accelerates the degradation,” says Daley.

“But in a breathable paper container, the effluent will disperse more easily either literally through the paper or through the little folds of the box.”

The paper can also absorb some of the chemicals.

And in some cases, the acidic vapour causes the metal film cans to corrode, further speeding up the film’s degradation.

“It’s like a looping snake eating its tail: It gets worse on its own,” says Daley. 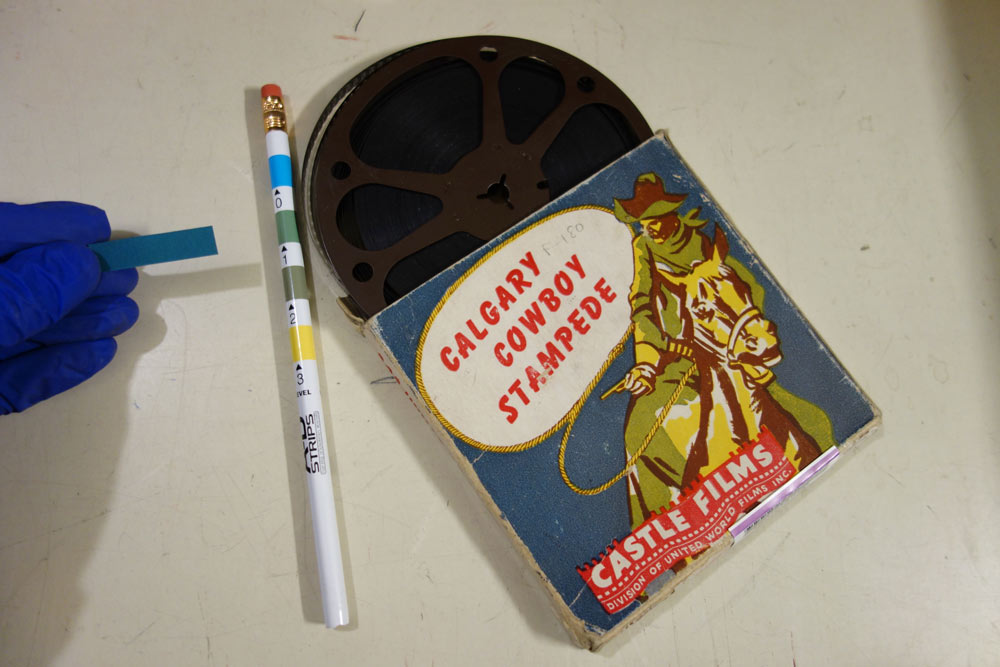 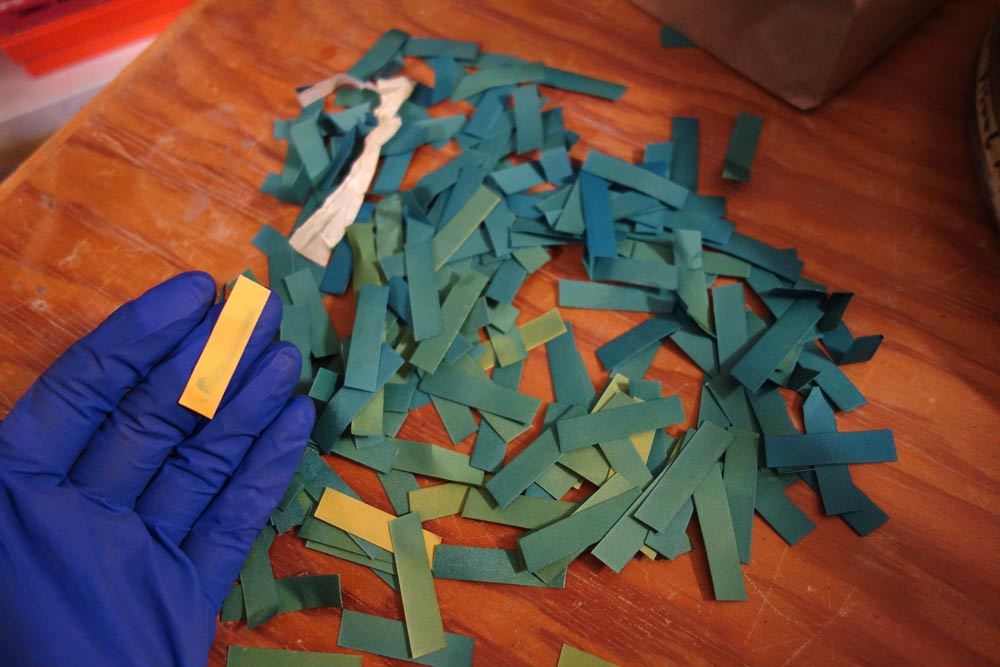 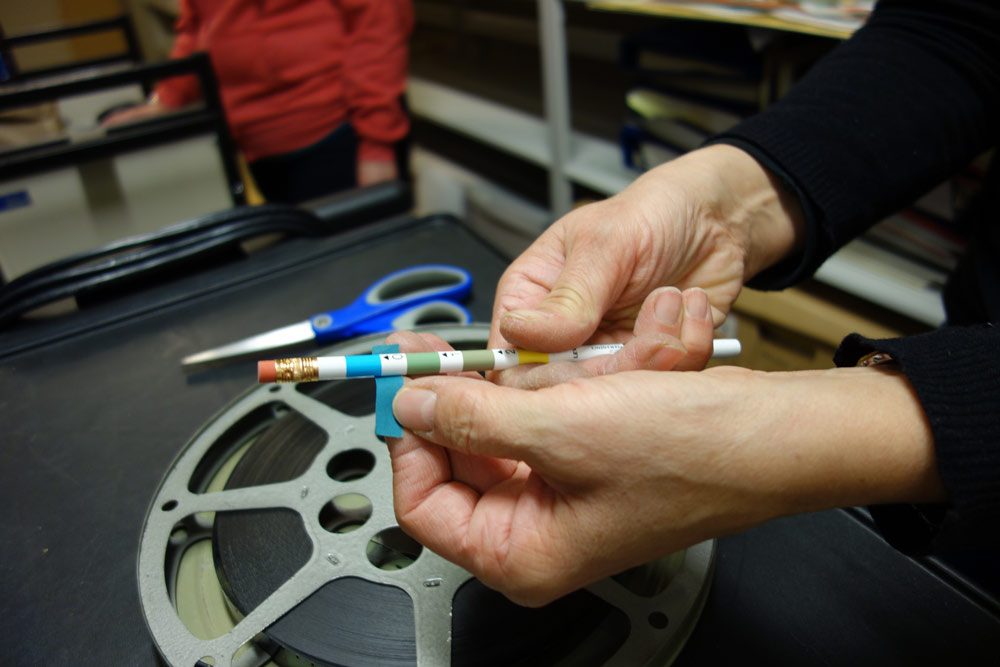 The colour of a used A-D strip compared to the scale on a pencil. David Daley photo. 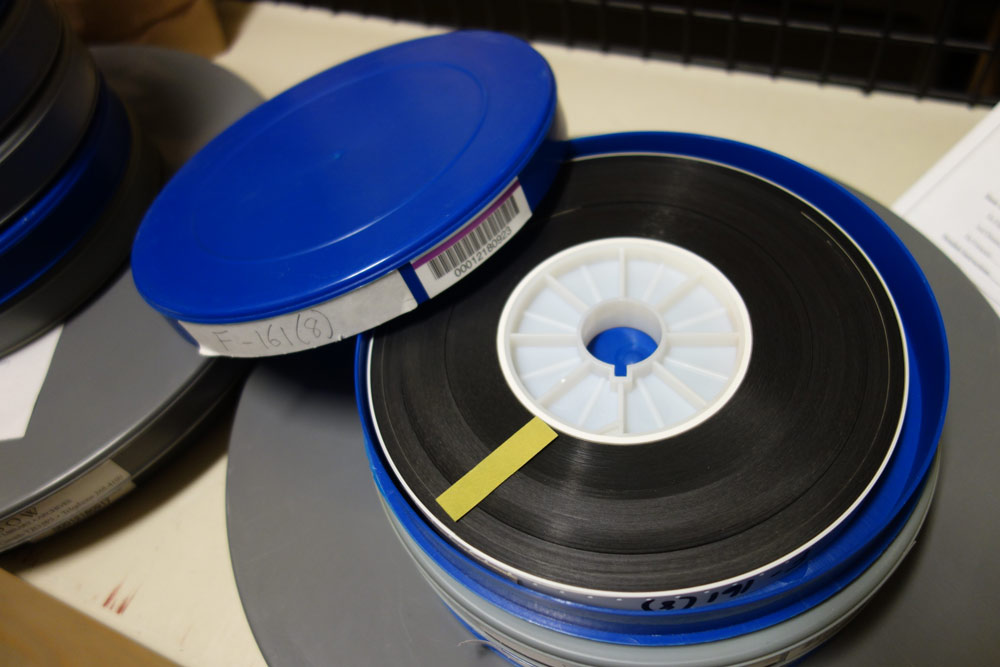 The testing and analysis done by the archives team will allow them to plan future preservation efforts for the collection.

“What this testing will allow us to do is to cater our housing to the degradation level of each reel,” says Daley.

Films with a yellow strip need to be frozen, while blue and green are OK in a cooler environment. The colour of the strips also allow archivists prioritize which films to choose for migration to a digital format. The greater the degradation, the higher the need for migration.

Archivists have to prioritize what goes where as freezer space at UCalgary’s archival facilities are somewhat limited. 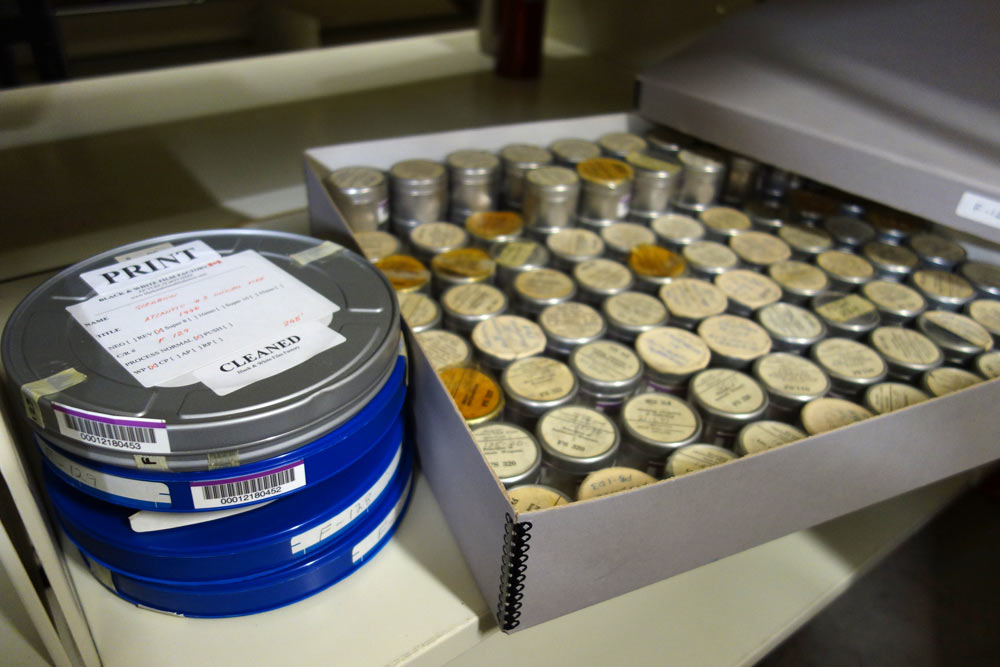 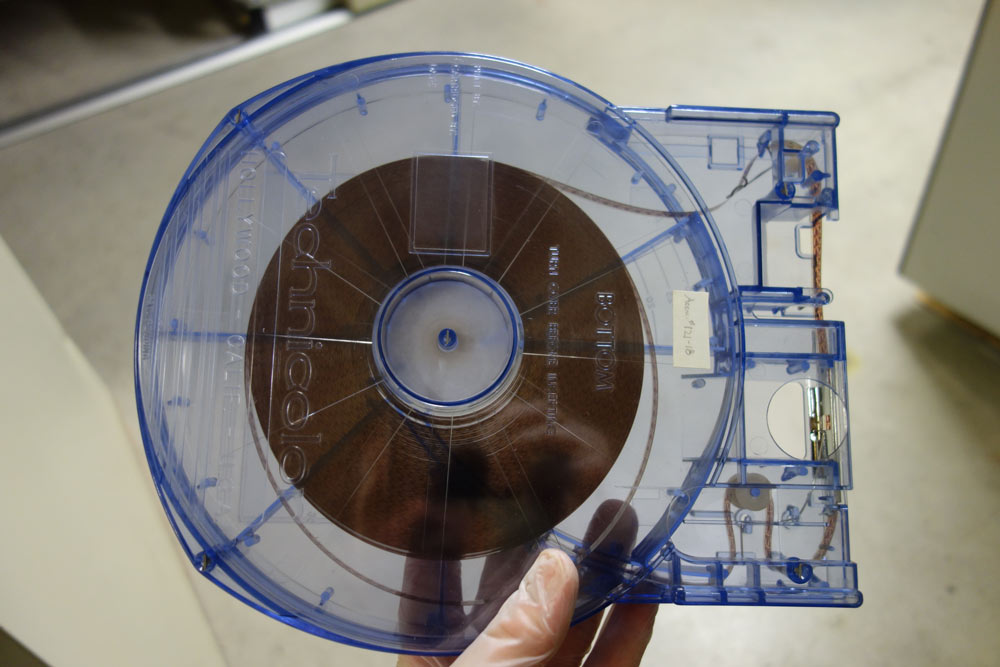 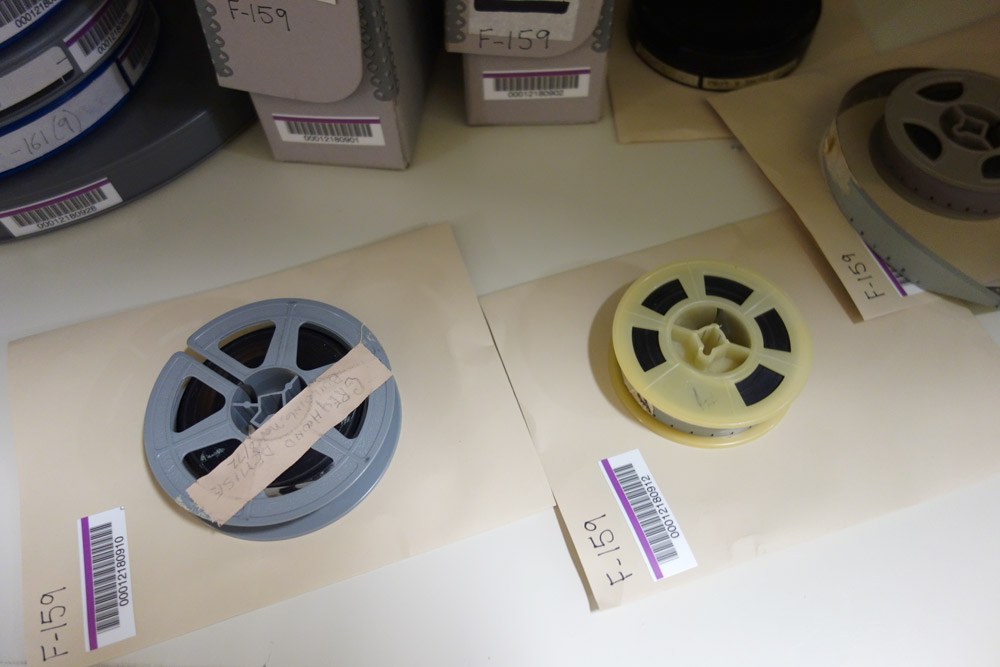 Film as a research tool

Vinegar syndrome, if left unmanaged, ruins acetate film, eventually destroying it. Once acetate film is too far gone, either too brittle or fused, migration to a digital format is impossible.

“(Film) speaks to people more quickly,” she says. “If you look at a picture, or a moving image, or listen to someone’s voice, those tend to be generally the more attractive and first resources researchers like to see over textual records.”

Please join us as we continue to explore the Glenbow’s collections. Subscribe for updates and look for the next post in two weeks.