Panoramic photos of the Glenbow Archives

These days anyone with a smartphone or a digital camera can make great panoramic photographs with the push of a button.

There was a time, however, when creating panoramic photos took considerable skill, specialized and most cumbersome cameras, film and paper.

But the results were worth it: Panoramic photographers (especially in the early- to mid-1900s) created highly detailed and physically impressive photographs that often reached lengths of 1.5 metres (5 ft.) or more.

When seen in person, these early panoramic photographs are much more impressive than the average one-button panorama produced in a smartphone or digital camera.

And fortunately, the University of Calgary has hundreds of the panoramic photos of the Glenbow Archives.

Included among those panoramic photos now at UCalgary are cityscapes, landscapes and group portraits. The group portraits include soldiers at Sarcee Camp during the First World War, cowboys at the Calgary Stampede, and members of service groups and other organizations.

As humans can see in a 160-degree arc (40 degrees of that is peripheral vision), we naturally gravitate towards panoramas. They’re more consistent with what we see compared to the dimensions of other photographs.

Joseph Nicéphore Niépce, a French inventor, took the first photograph in 1826. By the early 1840s, inventors had already developed the first panoramic cameras.

Today, with the popularity of digital photography, the current advancements in panoramic photography tend to focus upon improving the software used to create panoramas.

Nurses in training at the Holy Cross Hospital, Calgary, Alberta, 1927. The corner is torn. Glenbow Library and Archives, UCalgary: PE-144-1.

While historical panoramic photographs are impressive, they’re difficult for archivists and conservators to store and preserve.

“They’re challenging to conserve,” says David Daley, UCalgary’s conservation advisor, “but their uniqueness brings a host of excellent qualities that these photos have for interpretation and research. It also brings these preservation challenges. The most formidable problems are when the paper itself is so brittle that it really can’t be manipulated.”

So far, Daley says none of the panoramic photos of the Glenbow Archives or of the UCalgary archives are that far gone.

At the moment, the most common problem Daley has found is cracking, tearing and creasing.

For many years, just as we store posters, rolling panoramic photographs for safe-keeping was a common practice.

Rolling photographic paper, however, is problematic because when rolled the paper fibres will eventually stiffen in that position. Unrolling them without proper treatment causes the photo emulsion to crack and the paper to tear.

Currently, most of the panoramas in UCalgary collections are stored flat or hung encased in polyester sleeves in tall cabinets. Even so, cracks and creases show many of them had been rolled at one time.

“Ideally, (panoramic photographs) are best stored flat, but because of the length of them, it’s really challenging to flat store them. So, it makes sense that they’ve been rolled,” says Daley.

Storing panoramic prints in sleeves and hanging them in cabinets works but only if the sleeves are snug. Otherwise, the photographs can sag with time and crumple along the bottom edge.

Line up of officials and contestants at the Calgary Exhibition and Stampede, Calgary, Alberta. Glenbow Library and Archives, UCalgary: PE-78-1.

Conserving the panoramic photos of the Glenbow Archives

To unroll them, Daley uses a humidifier. The increased moisture in the paper allows the paper fibres to relax, and at which point, they can be safely flattened.

Other challenges include a panoramic photograph that is stuck to a large piece of glass. Daley believes this particular panorama, which at one time was enclosed in a frame, got wet. The water would have softened the emulsion, and as the photograph dried, the emulsion adhered to the glass. The panorama no longer has its frame, so in its current state—a large sheet of glass with a photograph attached to it—it’s remarkably fragile.

For now, as UCalgary archival staff, including Daley, are still moving material from the Glenbow to UCalgary, the treatment of the panoramic photographs has to wait. 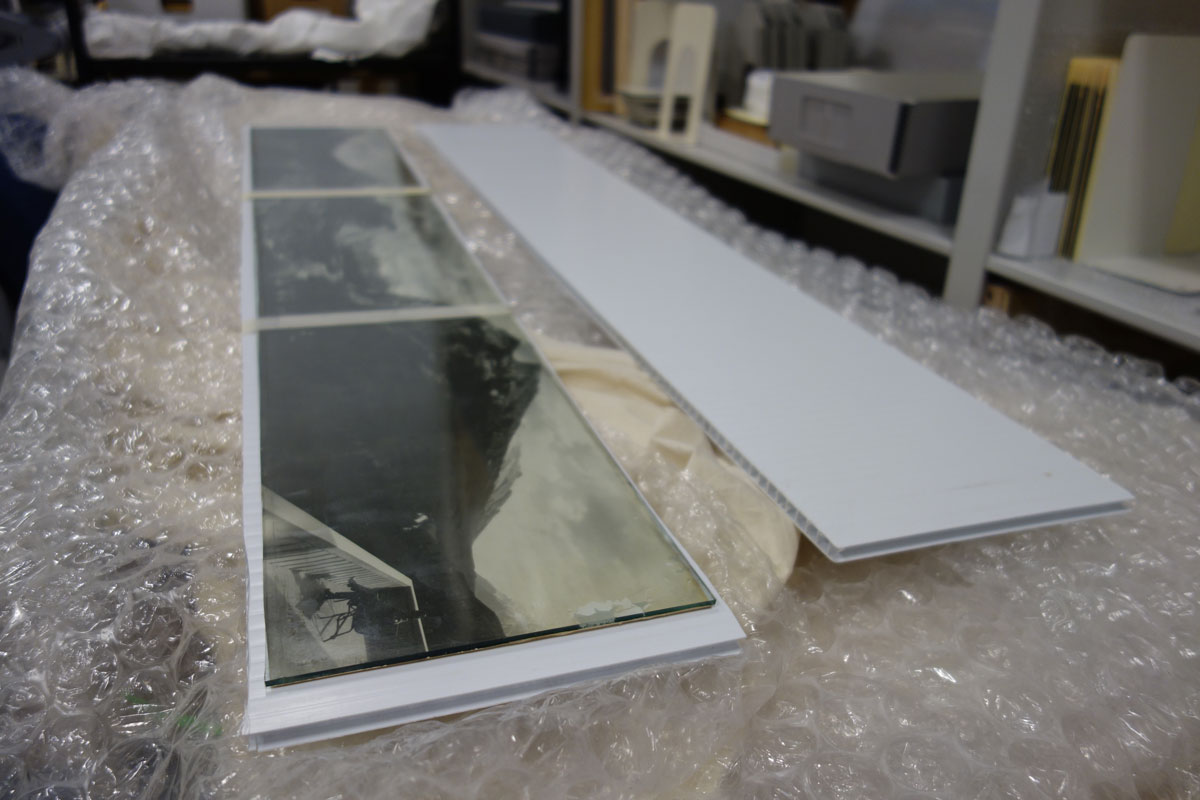 This panoramic photograph of a mountain scene, once framed, is adhered to the glass. David Daley photo.

Digitizing the panoramic photos of the Glenbow Archives

That doesn’t mean, however, that the panoramic photos of the Glenbow Archives have just been stored away.

So far, Brown has photographed 136 of the 400-some panoramas.

His challenge in photographing these unique prints begins with their size. The panoramas in the Glenbow’s collections range in size from 60 cm to 1.5 m (2–5 ft.) and up to 30 cm (1 ft.) in height.

As Brown’s first step is to remove them from their sleeves, their length makes handling them difficult.

“Some of them were just barely holding together because they’d obviously been stored initially in a roll and then squashed,” says Brown.

“There were rips along those creases, like 15 of them in one 48-inch piece, so as you’re delicately trying to pull them out of the (polyester sleeve), you’d have to really watch for that.”

Once removed from its sleeve, Brown uses numerous pushpins to mount each panorama to a sizable corkboard. The pins support the photographs but do not pierce the paper.

“They’re just sitting on the pin on the bottom edge, and the top pins hold them tight to the corkboard,” he says.

In the case of badly cracked prints, Brown will use upwards of 50 pins to support the photograph at every crease or break. Although, with one exception, he avoids heavily damaged areas.

The advantage of tacking the prints to a corkboard allows Brown to flatten all of the creases and cracks without having to use glass.

One of the critical and challenging aspects of photographing these prints is that cracks, creases and tears can reflect light, creating hotspots in the digital photographs.

So when it comes to photographing panoramic photographs, flatter is better.

The cracks and tears in these panoramic photos were caused by rolling the photographs for storage. The Glenbow transferred its panoramas to polyester sleeves and hung them in cabinets. Dave Brown photo.

Glass, while useful for flatting panorama photographs, comes with its own challenges. Namely, the glass needs to have no imperfections. It must also be as long, or longer, than the panoramas themselves. In the case of the panoramic photographs in both the Glenbow and UCalgary collections, that’d be about 1.5 m (5 ft.).

When lit with studio lights, just as the cracks or tears appear in the digital images as hot spots, each imperfection in the glass appears three times: one shadow for each of the two lights and the blemish in the glass itself. To fix those imperfections requires photo-editing software and time, lots of time.

Brown does, however, use glass to flatten smaller panoramic photographs. For ones without physical damage and that lie flat, he places them on a low table and photographs them from above.

But for long panoramas and for ones with damage, once he’s got them safely pinned, Brown illuminates his subject with studio lights, one on either side. He then photographs them with a digital camera mounted on a tripod.

All told, it’s relatively easy, inexpensive and efficient. From setup to teardown, it takes roughly 15 to 20 minutes to photograph each print.

It’s a system that has served Brown well with past projects, especially when digitization is one half creativity and one half working within the constraints of what you have available.

“This has worked for me in the past for all sorts of large maps and architectural drawings. You just have got to be super careful,” says Brown.

One option is to photograph panoramic prints in sections and then stitch the images together with software. While that method increases the resolution of an image, it also increases file size and the time it takes.

Although, it’s not always necessary to use professional-grade cameras; lower-resolution or consumer-grade cameras also work in a pinch.

“We decided this should handle most applications,” Brown explains. “If we need a higher resolution, I’ll have to do them in sections and stitch them at that point.”

“But rather than do the whole thing like that,” he says, “let’s just get them all online and see how much use we get out of them.”

Staff and students of the Provincial Institute of Technology and Art, Calgary, Alberta. Glenbow Library and Archives, UCalgary: PE-94-2.

Both Brown and Daley, meanwhile, are looking forward to sharing the panoramic photos of the Glenbow Archives.

“I enjoyed creating a facsimile of these gorgeous prints, knowing that it would be online for people to see because a lot of them are images that people haven’t seen before,” says Brown.

“And a lot of the prints are just downright beautiful. If you have a love of black-and-white photography, the prints are really gorgeous. And to be able to reproduce them so others can see them that was fulfilling.”

Daley, meanwhile, is intrigued by the stories found within these big and highly detailed photographs that interest him.

“The image quality is often very good, and you often capture all kinds of details that the photographer didn’t even know they were recording. So close examination can reveal all kinds of things, building history, construction, people on the street, addresses, you can see changes in neighbourhoods,” says Daley.

Staff and students of the Provincial Institute of Technology and Art, Calgary, Alberta. Glenbow Library and Archives, UCalgary: PE-94-2.