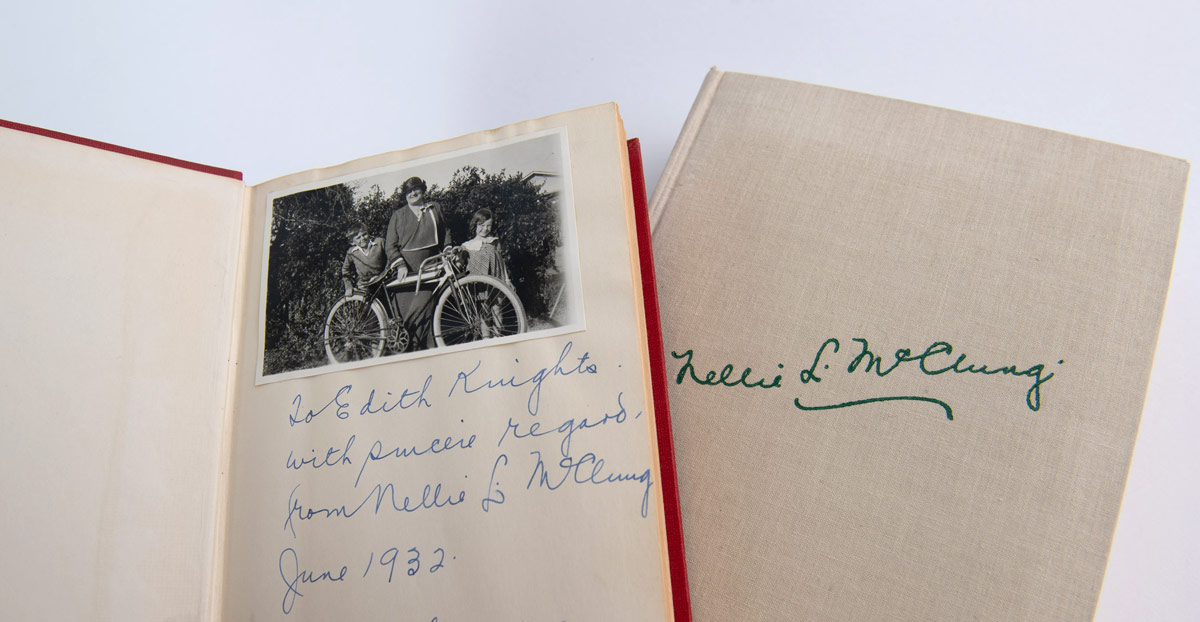 Nellie McClung and the Glenbow Library

In the 1930s, the author and activist Nellie McClung signed two of her books for Edith A. Clark, a southern Alberta woman who grew up in Calgary.

Later, both of these signed books (Be Good to Yourself: A Book of Short Stories and Clearing the West) became part of the Glenbow Library as two of its many unique items.

While the books themselves aren’t necessarily unique (UCalgary has its own copies), it’s the inscriptions and Nellie McClung’s signature that make them special.

Brenna Burwash, a special collections metadata assistant with Libraries and Cultural Resources (LCR), spotted the inscriptions in both books recently while preparing them for UCalgary’s library catalogue.

And so, recognizing that the inscriptions and the signatures added historical value to the books, she passed them on to LCR’s Special Collections. 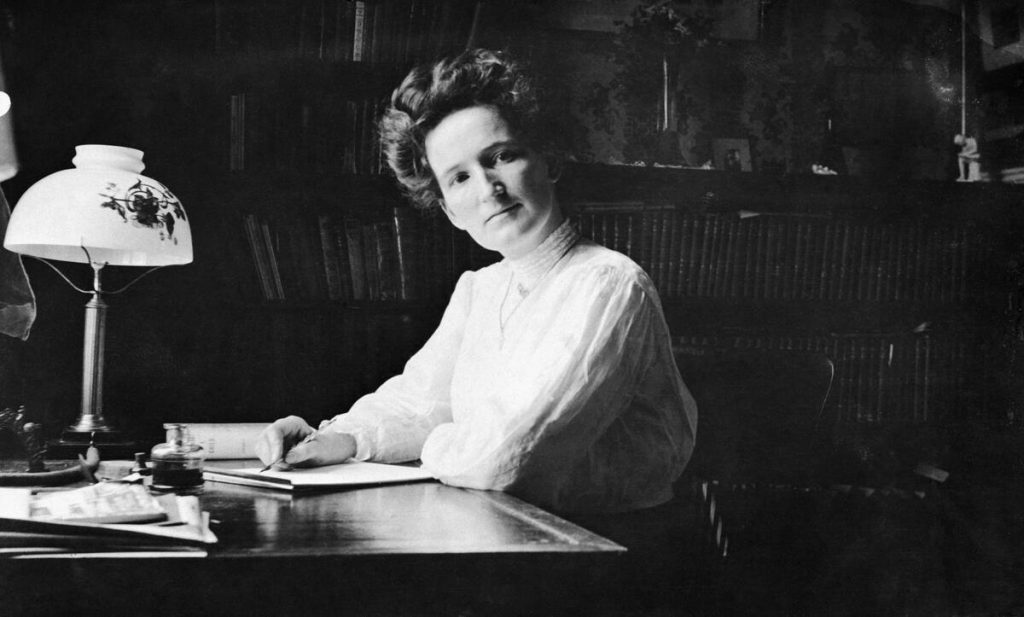 “My role is to receive materials from the Glenbow Library, including books, serials like magazines and newspapers, pamphlets, posters and all sorts of things,” says Burwash. “I link the items with a catalogue record and provide a barcode so they can be easily found by patrons and retrieved from the High Density Library.”

“I love finding inscriptions in the fronts of books, usually when a book has been given as a gift to someone before ending up in the collection. It’s such a personal thing to gift a book; it’s neat to find those little human touches,” says Burwash.

In Be Good to Yourself: A Book of Short Stories, the inscription reads: “To Edith Knight with sincere regard from Nellie L. McClung. June 1932. A merry heart goes all the way. God blesses the apostle of mirth! And you are one, dear Edith!”

Pasted above the inscription is a photograph of McClung standing with two children and a bicycle. 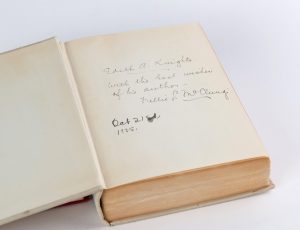 Nellie McClung’s signature and inscription to Edith Knight in Clearing in the West. Dave Brown photo. 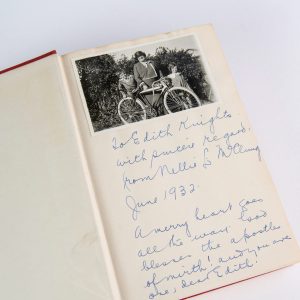 Nellie McClung’s signature and inscription to Edith Knight in Be Good to Yourself. Dave Brown photo. 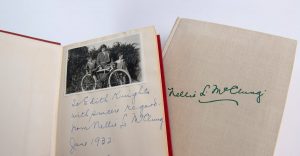 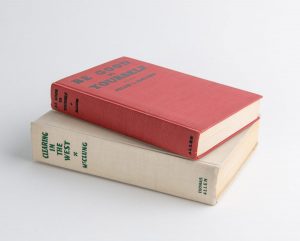 First edition copies of Clearing in the West and Be Good to Yourself signed by the author Nellie McClung. Dave Brown photo.

Special Collections is now storing both books with its rare book collection as a result of the inscriptions and the signatures.

“They’re unique,” says Allison Wagner, rare book and manuscript advisor for Archives and Special Collections at UCalgary. “They’re artifacts and not just content carriers. So, they’re certainly a valuable addition to the collections at the university.

“When I see (inscriptions) in a book, I always think there’s that human element to the artifact,” says Wagner.

The familiarity with which McClung referred to Knight tells Wagner the two women had a connection.

An online search showed Wagner that Knight went to high school in Calgary and then moved south of Calgary. Knight’s name, meanwhile, appeared in the social sections of newspapers in Vulcan and Calgary.

The rest of Knight’s life, however, is a mystery. 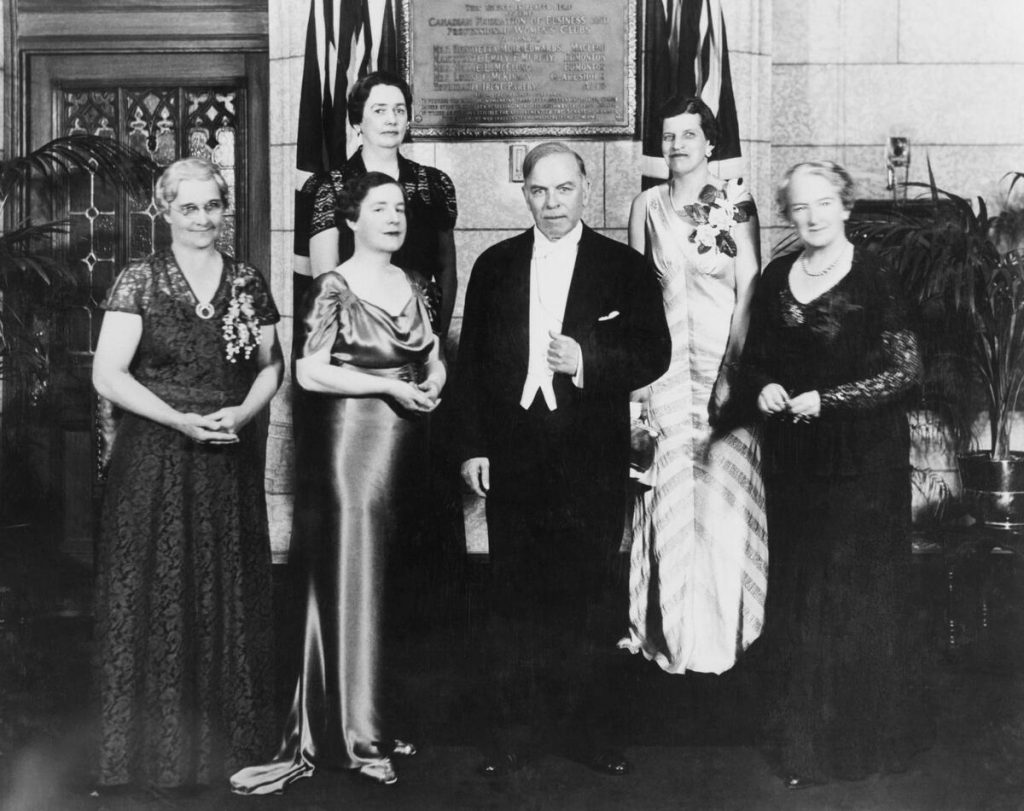 Born in 1873, Nellie McClung, who wrote over 16 fiction and non-fiction books, was a social reformer who fought for women, families and children.

McClung is also a controversial figure, however, for she supported the eugenics movement in Alberta.

But among her many positive causes, McClung supported temperance and the right to vote. She was instrumental in helping women in Alberta and Manitoba gain the vote, and she endorsed Japanese Canadians when they too sought that right.

McClung also pushed the Canadian government to allow Jews into Canada during the Second World War. 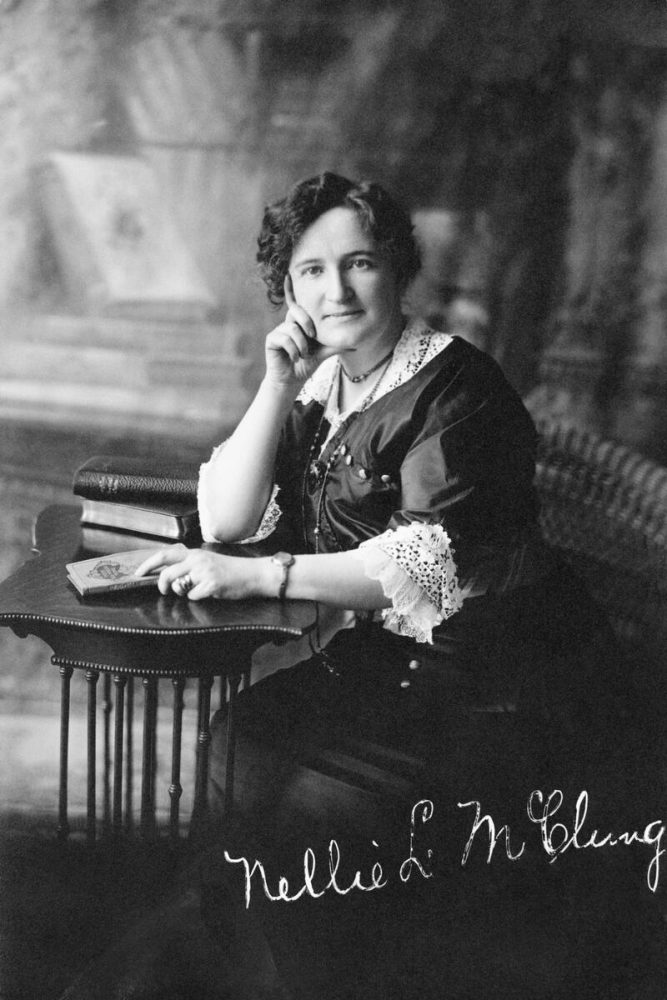 McClung was also a member of the Famous Five, along with activists Emily Murphy, Henrietta Muir Edwards, Louise McKinney and Irene Parlby.

In 1929, the Famous Five petitioned the Judicial Committee of the Privy Council in London to overturn the interpretation that only men could serve in Canada’s Senate. At that time, women were not considered persons under the 1867 British North America Act.

The Privy Council sided with the Famous Five, however, affirming that women were persons and could serve in the Senate. More broadly, the case (known as the Persons Case) confirmed that women had the same rights as men under the law.

A monument of the Famous Five, located at Calgary’s Olympic Plaza, was unveiled in 1999 to recognize the Persons Case and its role in Canadian history.

Today, the Glenbow Library holds some 125,000 volumes in its collection, currently on loan, covering a vast range of topics. Indeed, many of those books, journals, newspapers, maps and other materials like newsletters, fall into a few main categories: history and geography, biographies, the Canadian Pacific Railway, local histories, government, the Northwest Mounted Police, Indigenous peoples and the Arctic.

In all, between the university’s own collection and the Glenbow’s collection, UCalgary now has 37 books written by or about Nellie McClung.

“Everybody’s interested in something, and that is the beauty of the Glenbow is everything gets used,” says Kim Geraldi, reference specialist for the Glenbow Western Research Centre.

And that is one of the strengths of the Glenbow Library, founded alongside the archives in 1954. The size and diversity of the library allow researchers to delve into many different aspects of western Canadian history.

The library, like the archives, is full of treasures. Many of the books and other materials, such as journals, maps, newsletters and directories, are either the only copy in Canada or are one of a kind.

In fact, many of these resources—specifically the books—are personalized like the two Nellie McClung books.

For Burwash, meanwhile, working with Glenbow’s materials provides the opportunity to learn more about the history of the West.

“Working with the Glenbow material is such a fun job!” says Burwash. “It’s provided a unique view on Albertan and Western Canadian history.”

Please subscribe to stay up to date with stories exploring the Glenbow Library and Archives.