One of the great things about moving is the inevitable discoveries you make along the way. It could be a $50 bill tucked away in a drawer, grandma’s lost ring under a bookshelf or something you didn’t even know you had. But no matter what it is, finding these lost, forgotten, or unknown items is a delight.

Indeed, one of the most intriguing items to appear was a collection of large-format panoramic glass plate negatives stored in three heavy-duty wooden studio crates. Each of the 127 glass plate negatives—still in their original paper envelopes—likely hadn’t seen the light of day in a century.

The negatives, each measuring 17 inches wide by seven inches high, are part of the McDermid Studios collection, one of Glenbow’s premiere photo collections. The 17,000 photographs in this collection provide a visual record of Edmonton from the early 1910s through to the 1930s. It includes buildings, businesses, street scenes, events, and people.

“There are pictures of political figures during the Depression, also social and cultural activities, as well as military groups, building construction and the oil boom in the Edmonton area, so quite a rich source,” says Regina Landwehr, a UCalgary archivist.

Photographs collected in the 1950s

While it may seem odd that a Calgary-based archive holds a significant visual record of Edmonton, there’s a good reason for that.

Glenbow’s founder, Eric Harvie, obtained the first part of the McDermid Studios collection in 1957, while he actively collected throughout Alberta. At that time, Glenbow was the largest established archive in Alberta. Neither Alberta’s provincial archives nor Edmonton’s city archives had opened.

“(Harvie) was all over the province and neighbouring provinces and built this great collection. And we know from our accession records from the Glenbow that most of the McDermid photographs came in those early days when Eric Harvie was touring the province,” says Landwehr.

“So, thanks to Eric Harvie, we have a good record of Edmonton.”

While the McDermid collection mainly dates between 1912 and 1937, the glass plate negatives are more focused, dating from 1916 to 1920.
And where the McDermid Studios collection covers a wide range of topics, the glass plate negatives are all group portraits. A number of these photographs are of soldiers heading off to fight in the First World War.

Even though plastic film was available when the photographers of the McDermid Studios took the group portraits, glass plates were still in use. Early plastic film (cellulose nitrate), first introduced in the 1890s, couldn’t match the resolution of large-format glass plate negatives.

It’s that resolution that naturally made them ideal for group portraits.

“Plastic film was not quite advanced enough at that time to allow you to produce crisp images,” says Landwehr.

The leading process of the mid-1850s, the calotype, used a paper negative that tended to produce soft-focused prints.

Archer coated a glass plate with a liquid solution known as collodion (a mixture of cellulose nitrate and ether). He then soaked the plate in silver nitrate. The silver nitrate reacted with the collodion to create a photosensitive layer. Even though Archer’s glass plates offered sharper results, photographers had to work quickly as the plates had to be exposed and developed while the plates were still wet.

Although, the introduction of the dry glass plate process in the late 1880s fixed that problem. Dry process negatives, which had a light-sensitive gelatin emulsion, were stable and could be exposed much later in the field.

Large and difficult to handle

In the 1990s, the Glenbow digitized 12,000 photographs from the McDermid Studios collection, adding them to the online collection. Even so, Landwehr said it makes sense that Glenbow staff left the glass plate negatives out of that digitization project.

For starters, the wooden studio crates are heavy and awkward to handle. The glass plates, meanwhile, are fragile, while the paper envelopes that held each plate were disintegrating. In many cases, the envelopes had also stuck to the emulsion or photosensitive layer. 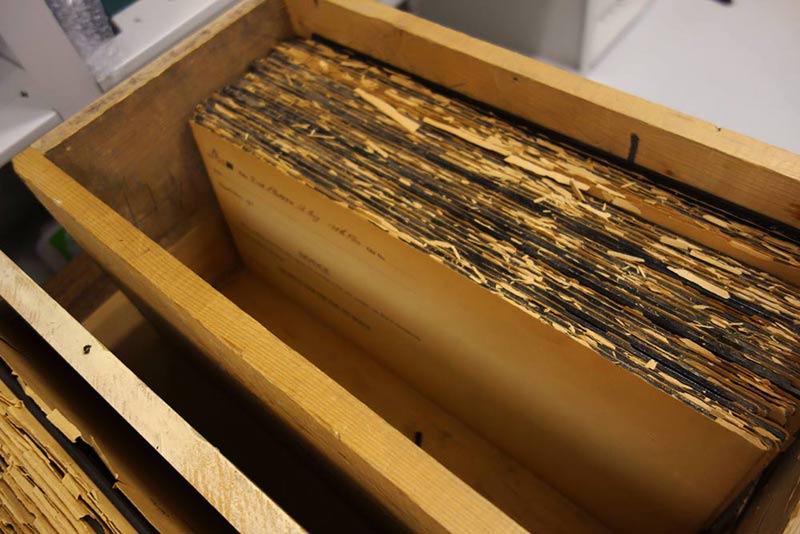 The glass plates also hadn’t been documented and added into the Glenbow’s collections databases. To do that required administrative and conservation work, as UCalgary staff soon found out.

UCalgary staff first had to process the glass plate negatives, inventory, clean and prepare them for digitization. And that meant handling the glass plates carefully to reduce the risk that they’d be broken.

The negatives were packed with foam and shipped to UCalgary’s Taylor Family Digital Library, where conservation advisor David Daley and photographer Dave Brown got to work.

Daley cleaned and conserved the plates, preparing them for long term storage, while Brown took high-resolution photographs of each negative. Using a camera mounted to a copy stand, Brown photographed the damaged negatives twice; once to record the image and again to show the actual physical damage. Negatives in good shape were only photographed to record the negative image.

To record the image itself, Brown photographed the negatives on a light table. For the damaged negatives, meanwhile, he turned off the light table and used the copy stand lights to illuminate the negative’s surface. 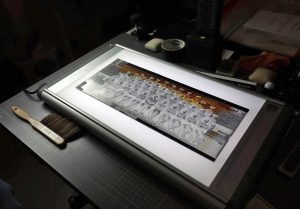 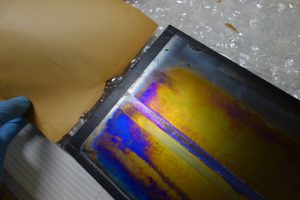 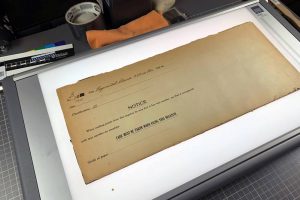 One of the original McDermid envelopes. David Daley photo.

Despite some chips and cracks, along with some water damage and faded emulsions, Daley said the glass plate negatives are in good shape overall. Tucking them away for another day instead of handling or using them saved them from further damage.

“Often, when working with collections like this, we see problems associated with the plates themselves: cracking, losses of corners, or the plates themselves are in a number of shards. In this collection, some of them had corners missing, but that was the worst of it. Some had cracked as well, but for the most part, they are all generally intact, which was a pleasant discovery,” says Daley.

The chemicals in the paper envelopes, specifically acids, also damaged the emulsion of some of the glass plate negatives. Faded or discoloured negatives, or instances where the envelopes adhered to the emulsions, for example, are indicative of this damage.

Digitizing for preservation and sharing

Daley removed each negative from its envelope in a clean-air station. He then dusted each plate with a soft brush. In the cases where the envelopes had become stuck to the emulsion, however, he used a tiny spatula to gently remove the paper.

Once Daley had prepared each plate, he (carefully) passed it to Brown, who photographed it.

If the plate was in good shape, Brown, using a light table, only photographed the negative image on the plate.

Brown then took two photographs of the damaged negatives. The first to show the condition of the negative, including any damage, as a conservation or preservation record. The second photograph captured the negative image on the glass plate.

Brown also photographed each envelope to retain any information (also known as metadata) recorded on them, such as date, place or group. However, the envelopes were not kept given their state of deterioration. Daley constructed archival sleeves for each negative, however, and packed them away in new foam-lined plywood crates. Each crate has a lid to keep out the dust.
The high-resolution digital photographs (TIF files at 600 pixels per inch) will also be archived on UCalgary’s servers and saved for future projects. Lower resolution copies, meanwhile will be added to the Glenbow Library and Archives digital collection. 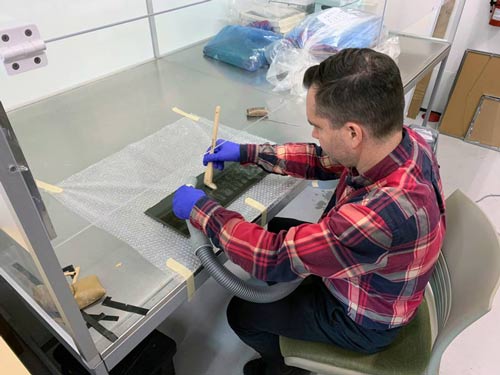 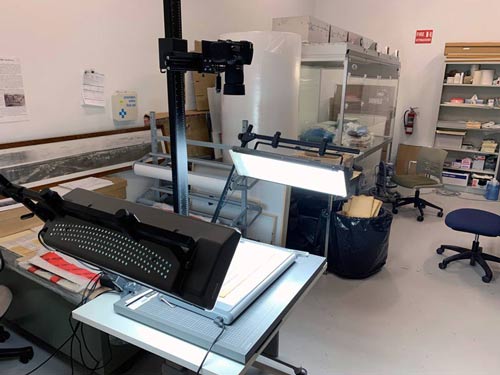 A camera mounted to a copy stand with lights and a light table. Dave Brown photo.

Please join us as we continue to explore the Glenbow’s collections. Subscribe for updates and look for the next post in two weeks.