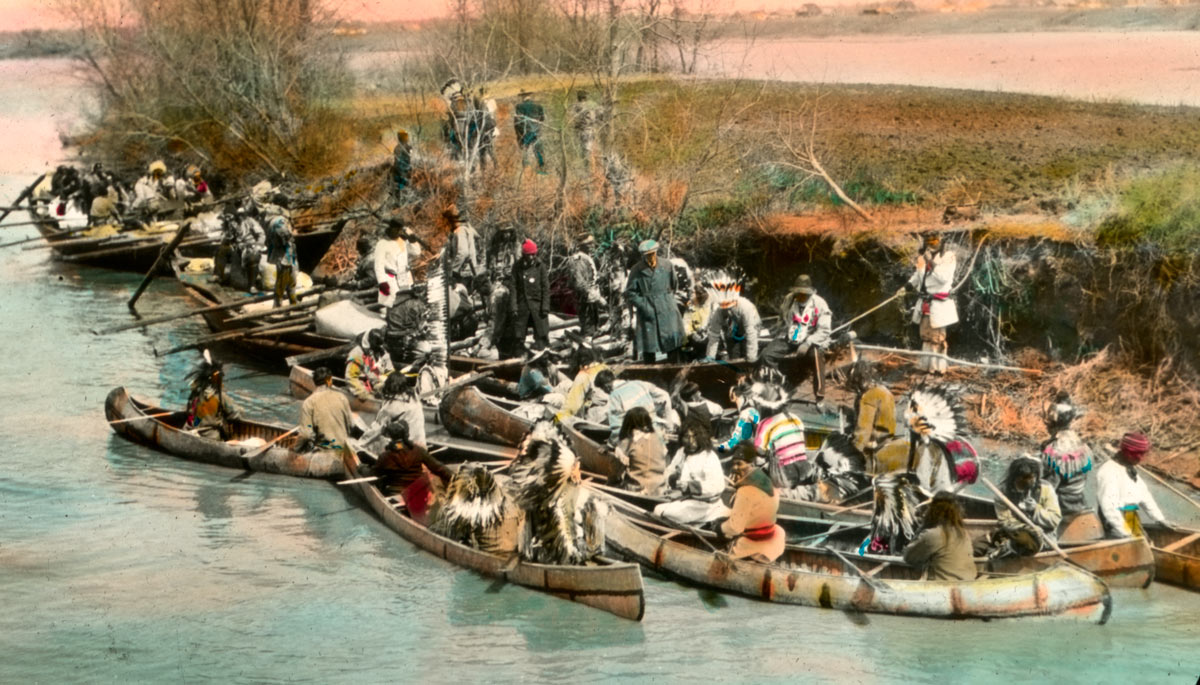 Compared to other art forms, the history of photography is short. In fact, the first photograph—a view of a building in France—was only taken in 1826. But new processes soon followed that photograph, each more accessible and economical than its predecessor.

And so, by the 1880s, photographers across the West were busy documenting a changing landscape that saw the construction of the Canadian Pacific Railway. For this reason, many of Glenbow’s photographs come from this period of development in the West. Dig deep enough into the Glenbow’s archives, and you can find examples of many of the early historical photographic processes used since the inception of photography, including daguerreotypes and lantern slides.

Louis Jacques Mandé Daguerre developed the daguerreotype in 1837. He devised a process that would fix an image to a polished copper plate. Daguerre used iodine fumes to add a light-sensitive layer, heated mercury to develop the image and a salt solution to fix it. As the first commercially accessible process, it consequently launched portrait photography. Soon millions of people had their portrait taken, despite having to sit still for 15 minutes. 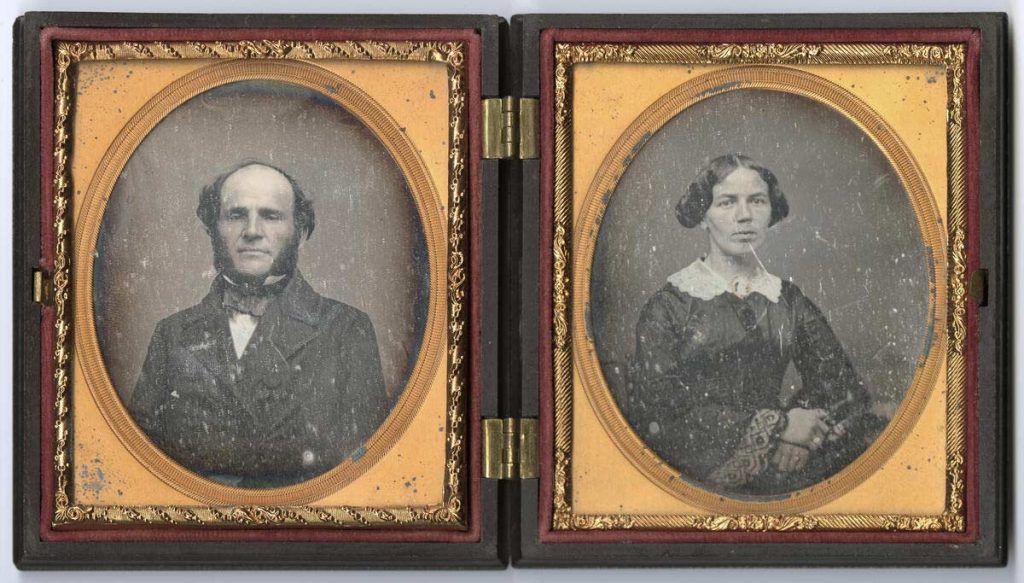 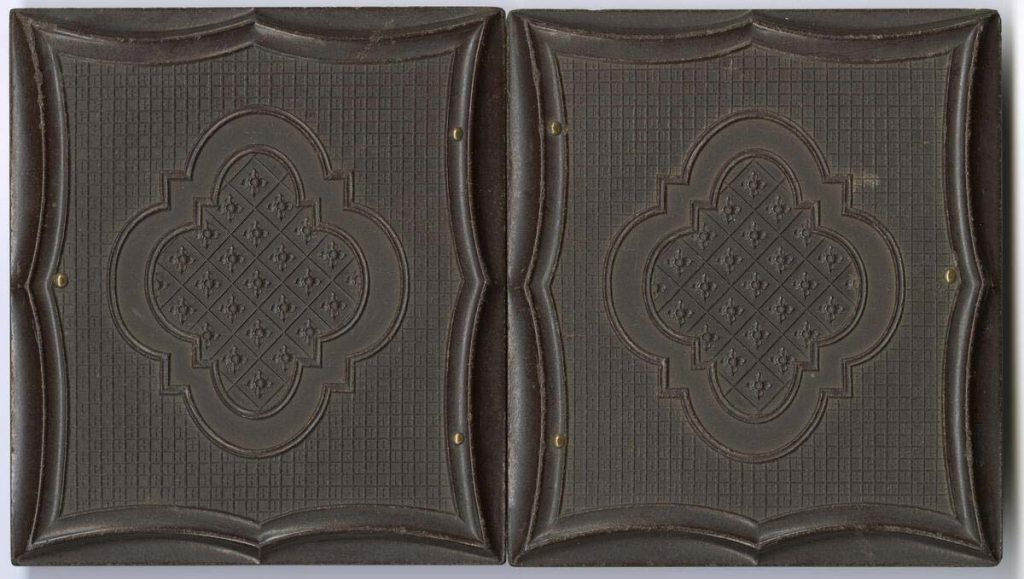 A daguerreotype of an unidentified man and woman (back). Glenbow Library and Archives, UCalgary: PA-3579-4. Anita Dammer photo.

Ambrotypes replaced daguerreotypes. This process used small glass plates with a thin, light-sensitive emulsion that was dipped in a silver nitrate solution before taking a picture. The photographer exposed the plate while still wet and then promptly developed it in a portable darkroom. The resulting image appeared as a negative until the back was varnished or painted black, turning it into a positive image. However, glass plate negatives replaced the ambrotype by 1865. The Glenbow only has a few ambrotypes in its collections. 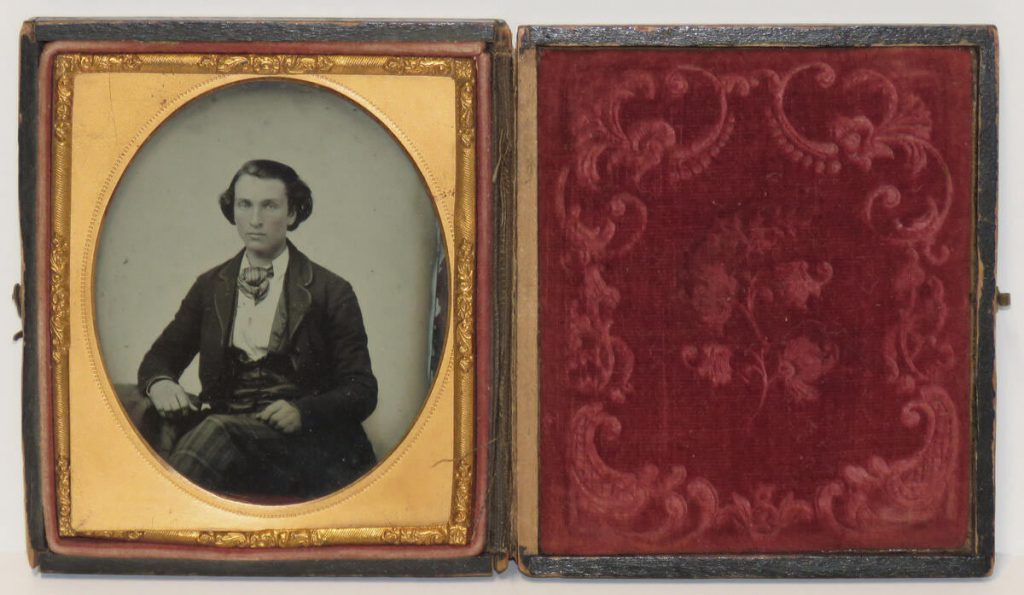 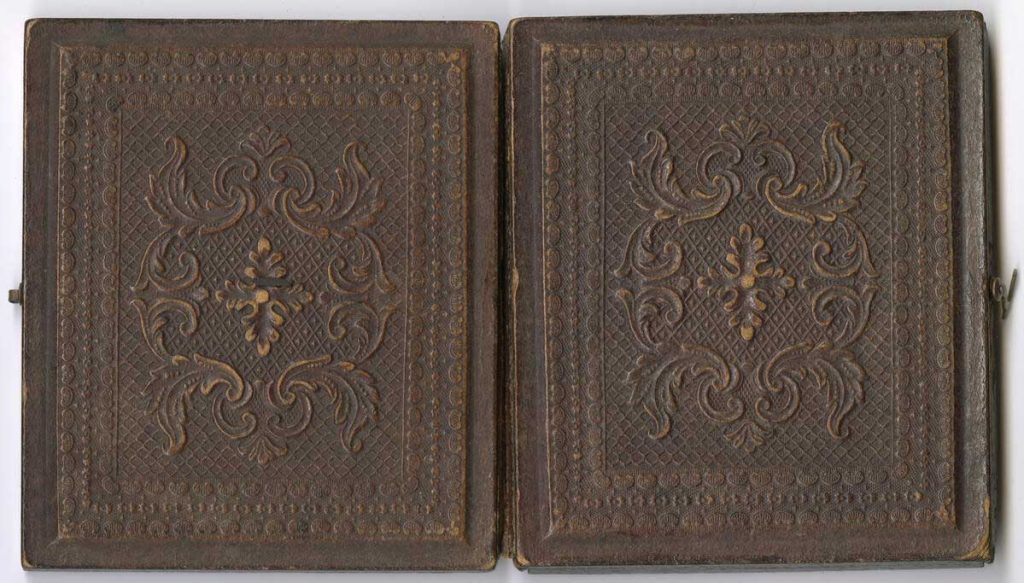 Tintypes, which used a thin sheet of tin or iron instead of glass or copper, was a common format between 1860 and 1920. Before taking a tintype photograph, a photographer applied a light-sensitive fluid to the metal sheet. Inventors later developed a dry process, allowing photographers to coat their tin sheets before setting out. Once exposed, the metal plate was fixed with a highly toxic potassium cyanide solution and then varnished to protect the image. Tintypes were inexpensive and easy to produce. The process also had a relatively short exposure time of about five minutes. 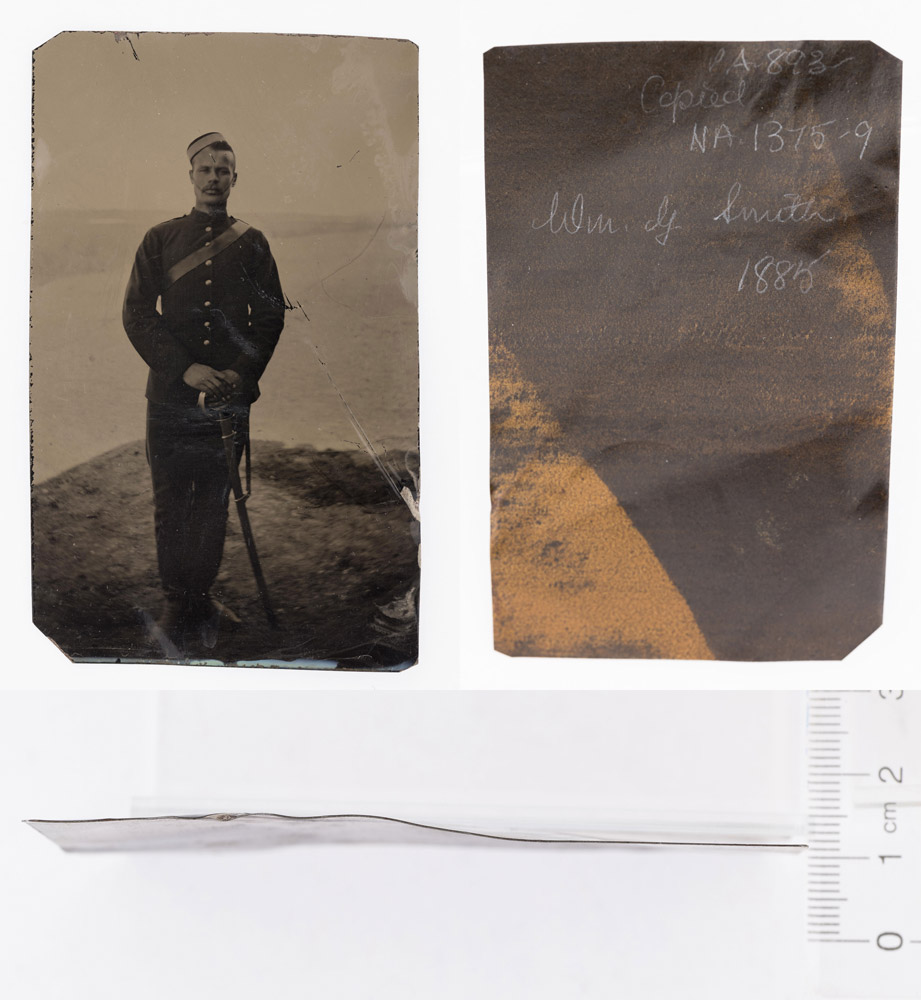 This compilation image represents the true colour tone often present in tintypes, while the far right portion of the image shows how thin the metal support material often is. Andy Nichols photo.

Glass served as the base for both positives (slides) and negatives until cellulose or plastic film appeared in the early 1900s. Like ambrotypes and tintypes, photographers coated glass plates with a light-sensitive liquid just before taking an image. Later developments in photography allowed photographers to apply the emulsion before setting out. They could then expose their negatives in the field and develop them later. Dry plate negatives saw regular use up to the 1920s, while some photographers are still using them today. One of the Glenbow’s significant collections—the McDermid Studios collection—includes 127 panoramic negatives, each measuring 17 inches wide. 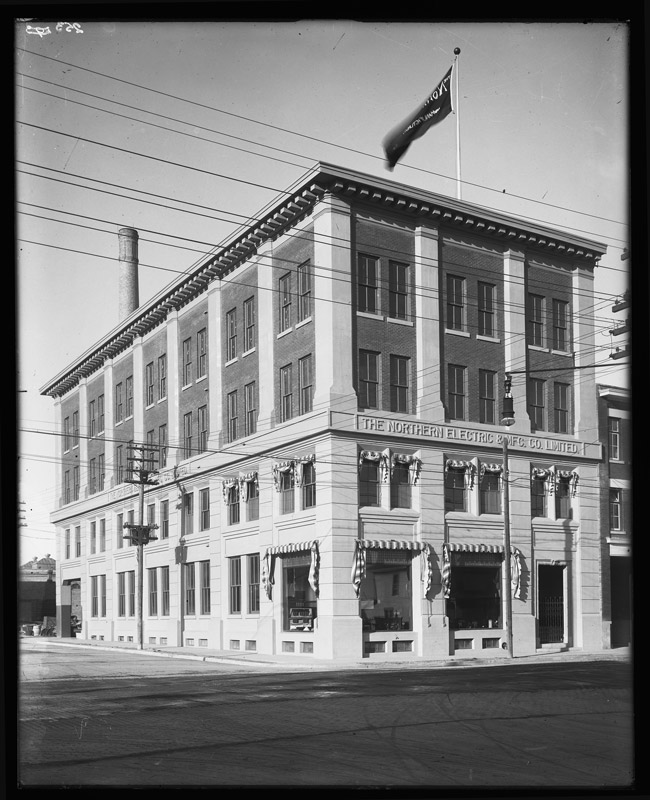 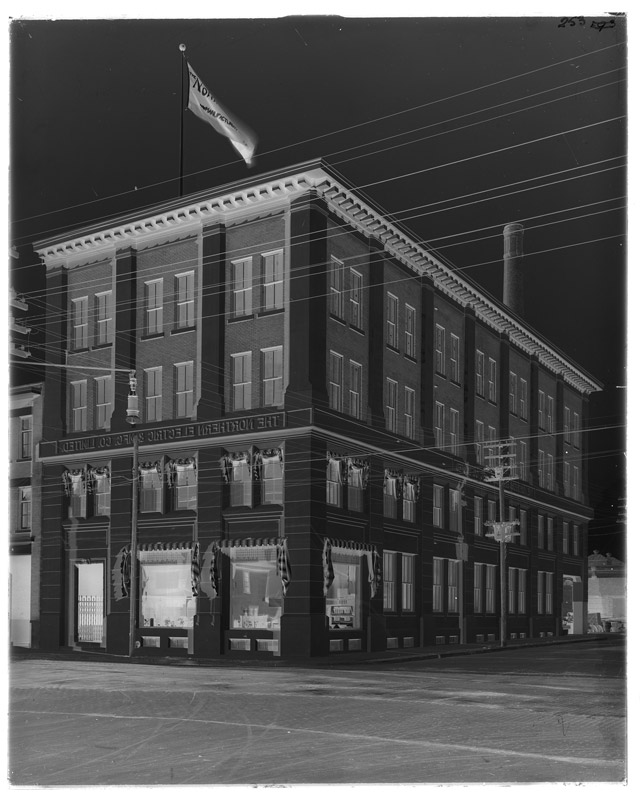 Photographic lantern slides, also known as magic lantern slides, were first introduced in the mid-1800s. Lecturers, speakers and entertainers used these slides to educate and entertain. Companies produced lantern slides from two panes of 3.25-inch glass bound together with black tape. One pane served as a base for a photograph, while the other pane protected the image and made the slide more durable. Artists often hand-tinted lantern slides.The William Hayward collection contains 250 lantern slides taken by Hayward, who worked as a constable with the North-West Mounted Police in the Yukon Territory in the early 1900s. The C.C. Ross collection, meanwhile, contains 138 lantern slides of Alberta’s oil industry. 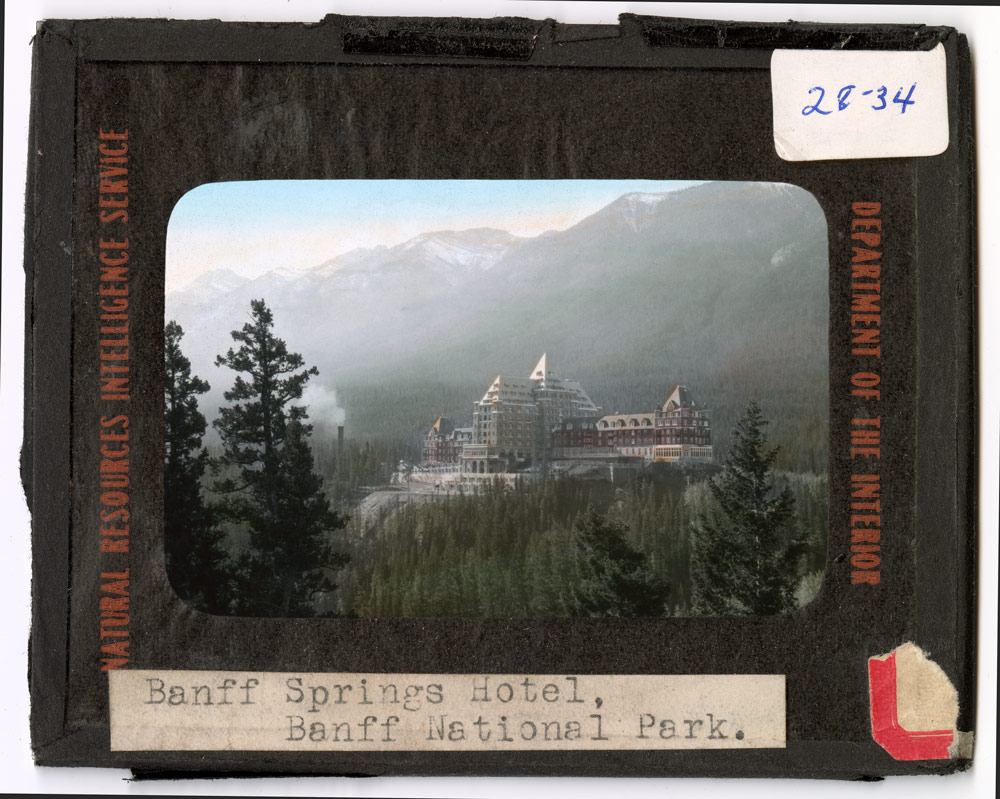 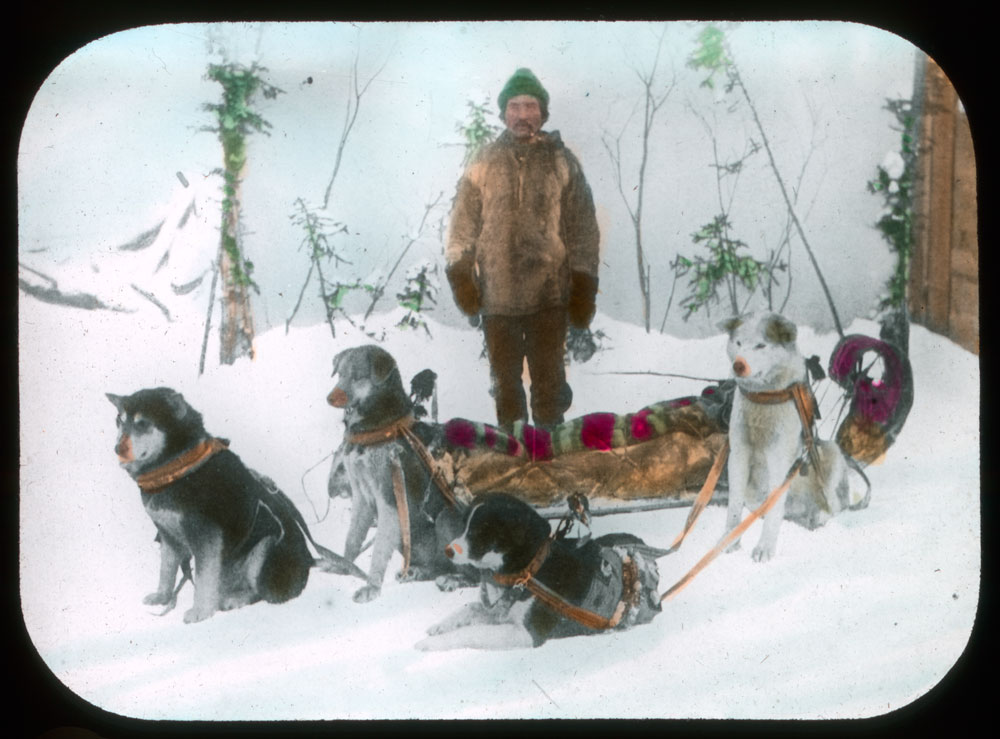 Silver gelatin photographic prints were first developed in 1871. Instead of using toxic solutions to coat the various mediums to create a light-sensitive layer, an English photographer, Richard Leach Maddox, turned to gelatin. Maddox embedded the light-sensitive salts in a gelatin emulsion, creating a secure and stable medium that is still in use today. 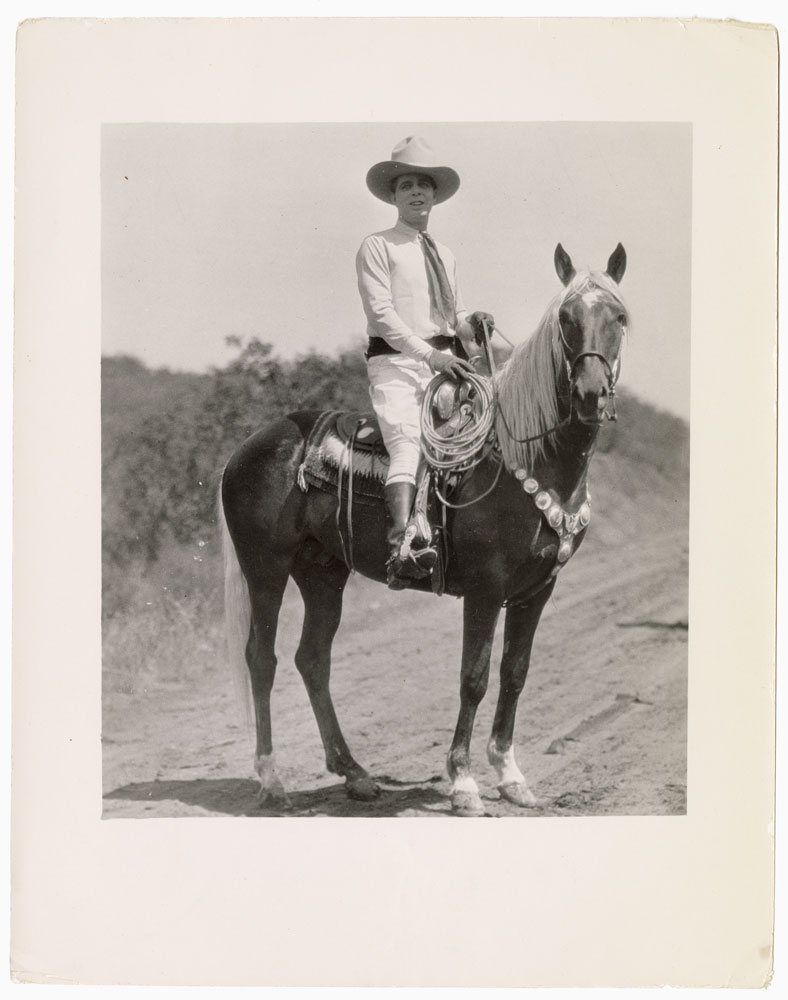 Movie star Hoot Gibson in Alberta. Photos printed on thin paper as this one was, were generally intended to be mounted in a rigid folder. Silver gelatin photographic print. Glenbow Library and Archives, UCalgary: PA-829-14. Portrait of Florence La Due in 1912. Florence was a vaudeville performer and wife of the Calgary Stampede founder, Guy Weadick. A photographer’s mark has been pressed into the corner of the photo. Silver gelatin photographic print. Glenbow Library and Archives, UCalgary: PA-829-52.

Postcards were once an essential communication tool. They were simple and inexpensive to produce. Many amateur photographers made their own photo postcards using folding pocket cameras and compact developing kits. Jotting a quick message on the backs of your postcards and mailing them made for a fun form of communication. Even though postcards reached their zenith in the 1930s, many people still collect and send them today. 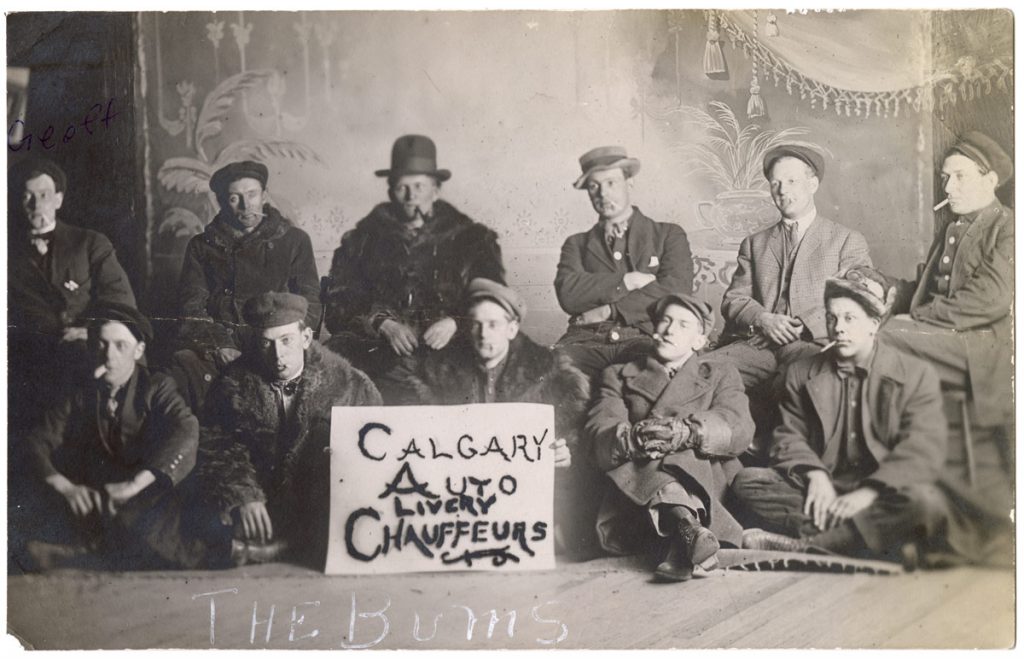 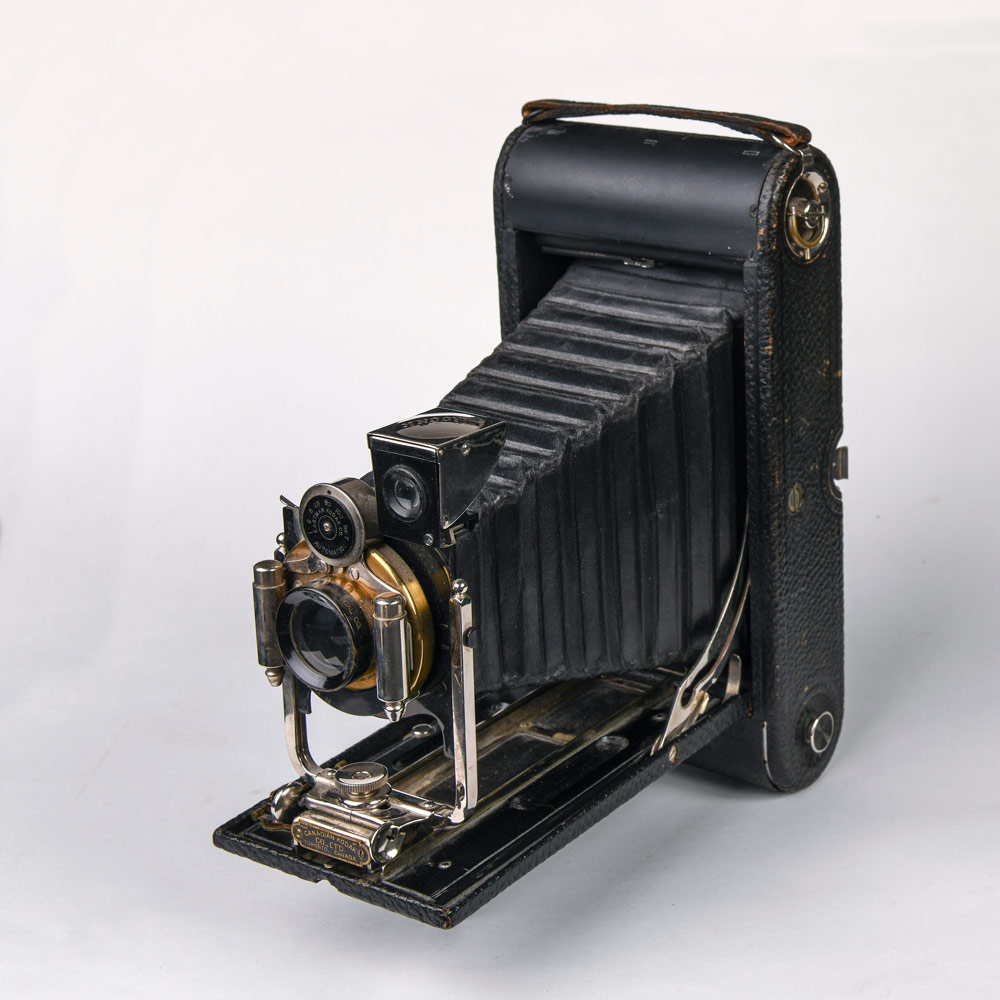 Flexible roll film was first introduced in 1885. It eventually replaced glass as the main base for both positive and negative images. Cellulose nitrate film, the first version of this flexible film, was flammable and prone to self-combustion. However, acetate film, also known as safety film as it was fire resistant, replaced nitrate film. Until digital photography emerged in the 1990s, film remained the most popular process. The Glenbow archives contain both nitrate and acetate negatives. 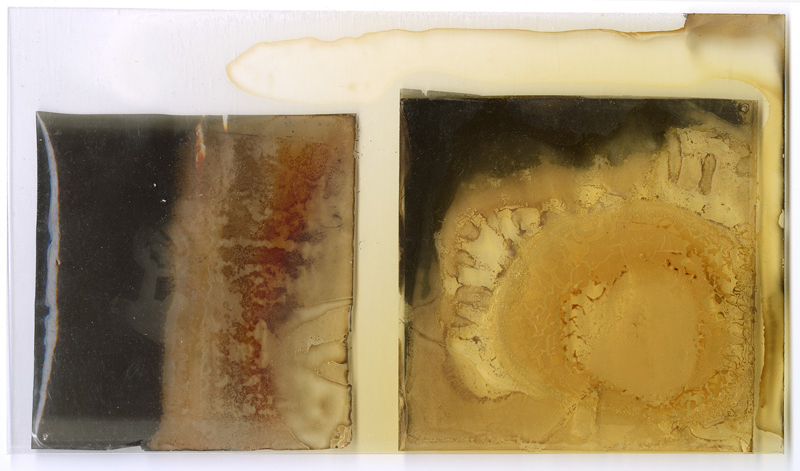 Our library and archives staff have developed a deeper level of appreciation of historical photographic processes. As a result, we’ve been able to see real examples in the Glenbow Archives and other archival collections that we steward. In September, we launched our Historical Photographic Processes Digital Exhibit. In this exhibit, you can explore the history of these processes in more depth, learn more about deterioration characteristics and how to care and handle these materials. You can also explore the cameras that create these historical photographs. The site was created by Rob Alexander, Dave Brown, David Daley, Anita Dammer, Kelsey Jacobi, Andy Nichols and Kathryn Ruddock.

To learn more about these processes, follow this link to the Historical Photographic Process in Archives and Special Collections website.
In the meantime, please subscribe to receive notifications of new posts that explore the Glenbow Library and Archives.