Down the rabbit hole: Part 2

Welcome back to the rabbit hole! In the last post, we looked at two particular rabbit holes archives staff Bonnie Woelk and Allison Wagner fell into as they began working with the material from the Glenbow Library and Archives.

Falling down the rabbit hole — courtesy of Alice in Wonderland — is a constant hazard for researchers. It’s a highly effective distraction, not unlike walking into an obedience class for excitable dogs and yelling “squirrel!”

This post, meanwhile, shares holes Archives Specialist Christie Teterenko and Annie Murray, the head of Archives and Special Collections at UCalgary, fell into while packing materials for shipment to the University of Calgary.

Teterenko found a collection of meatpacking manuals while Murray became intrigued with a scrapbook documenting the Canadian journey of two French dolls made for Princess Elizabeth and her sister, Princess Margaret Rose.

And no matter how strong someone’s will power might be, however, falling down the rabbit hole happens to everyone. Even so, it is also one of the most enjoyable parts of the research process. After all, falling down a rabbit hole keeps archival research fun. 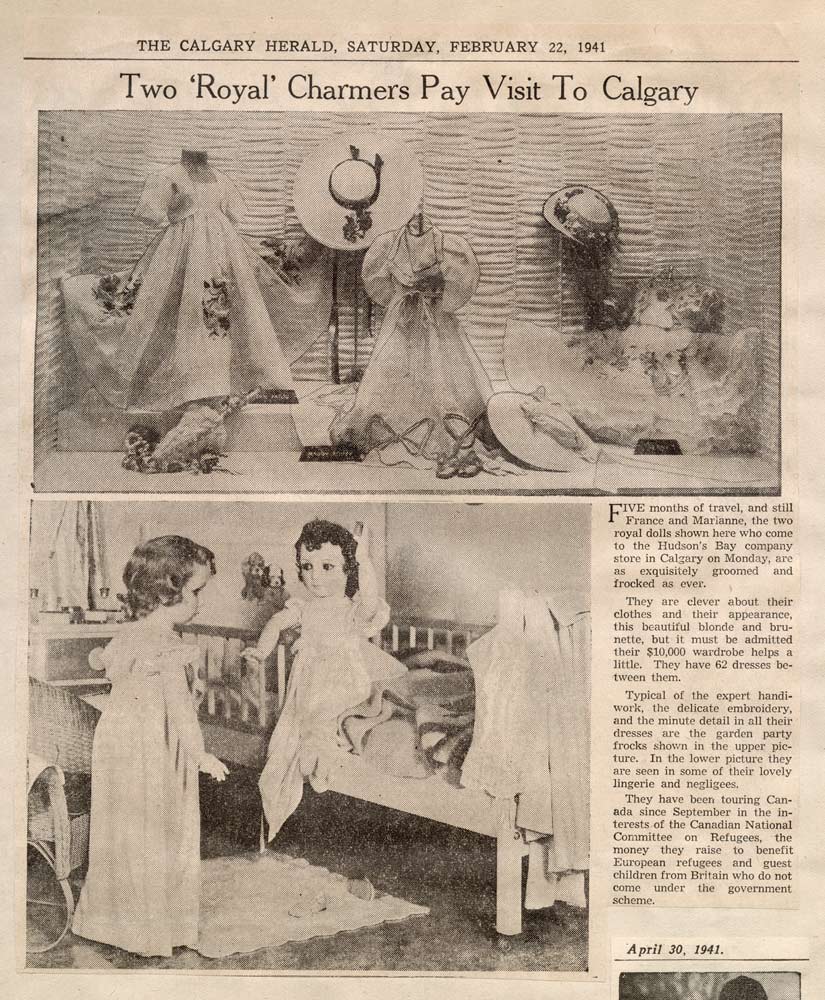 A newspaper clipping about the dolls’ visit to Canada. Glenbow Library and Archives, UCalgary: M-827-vol20-3.

The dolls France and Marianne

When King George VI and Queen Elizabeth travelled to France during a 1938 State Visit, the children of France presented them with two beautifully crafted dolls.

The one-metre-tall dolls, named France and Marianne were a gift for Princesses Elizabeth, 12, and Margaret Rose, 8. The dolls came complete with a 360-piece collection of clothes (including 62 dresses) and accessories, including a Citroen model car.

The dolls were both a sign of friendship between the two countries and a showcase of French designers. And while the princesses did get to play with them, it wasn’t for long as the Royal family chose to use the dolls to help charities.

They first went on display at St. James’s Palace to raise money for the Princess Elizabeth of York Hospital for Children. And then, followed by a stint in Scotland in 1939 to raise funds for King George V’s Jubilee Trust, the dolls arrived in Canada in 1940 to support the National Committee en Refugees. Money raised from their tour was used to help European refugees and British children sent to Canada during the war. 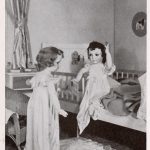 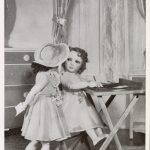 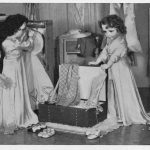 Travelled with their an entourage

While England’s Royal Collection Trust cares for the dolls, the Glenbow Library and Archives has in its collections a scrapbook about the Canadian tour.

Etta Mather, a member of the Calgary Imperial Order of the Daughter of the Empire (IODE), donated the scrapbook to the Glenbow, along with numerous other scrapbooks filled with clippings, postcards and photos of the Royal family. She also donated records relating to the IODE Calgary chapter.

The dolls, meanwhile, travelled across Canada on their 17-stop tour with an attendant. When the dolls arrived in Calgary in February 1941, the Hudson’s Bay Co. displayed them in its downtown store.

“The dolls travelled with their own personal attendant, who was alive,” says Murray, laughing. “Her name was Christina, Miss Christina, and so she went with the dolls. In every city, the local (IODE) association would give one—and one assistant only—to Miss Christina to help prepare the dolls.”

When the dolls, which have human hair, arrived in Ottawa, their first stop was at a salon.

“They had been waved by Antoine in France, and then in Ottawa, the firm of Laura Thomas re-waved the hair, so they would look great and then be ready to travel,” says Murray. 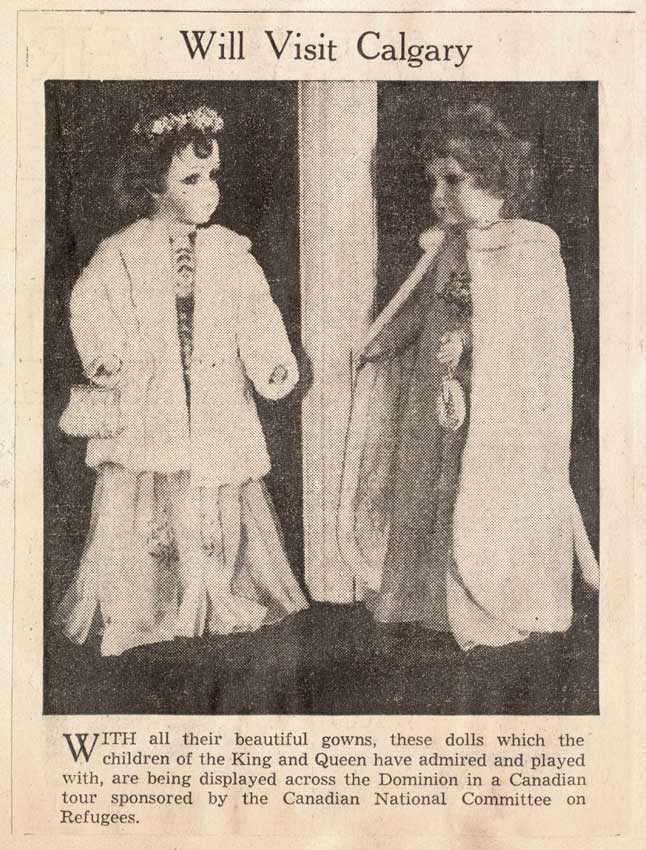 A newspaper clipping about the dolls’ visit to Canada. Glenbow Library and Archives, UCalgary: M-827-vol20-3.

While stepping from royal dolls to meat packing may seem like a stretch, both highlight Glenbow’s range of materials.

Teterenko spotted the meatpacking manuals while preparing an unprocessed collection to send it to UCalgary’s archives.

“Some of the most amazing things happen at the Glenbow as I’m packing up boxes and going through photos and videotapes and audio; it’s the things that you stumble upon,” says Teterenko.

“I was re-boxing an unprocessed collection called the Stubbs family fonds, and the first thing I saw were images of the byproducts of swine, which definitely piqued my interest,” she says. 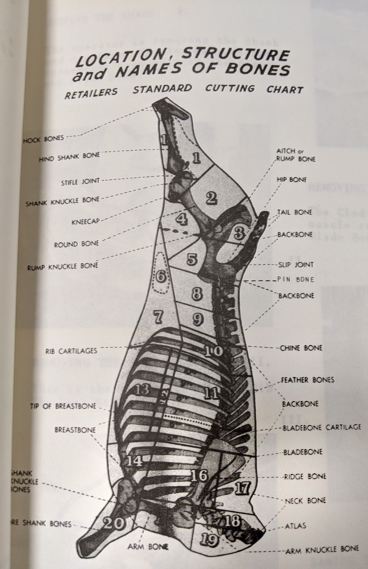 The collection holds a series of technical reports that the Stubbs collected  from meatpacking plants and chemists between the 1920s and the 1970s.

“It doesn’t sound exactly the like the most interesting thing in the world,” says Teterenko, “but you can always glean some little fun little things from any collection as far as I’m concerned.”

For example, Teterenko says the manuals showed her how to display meat, process ham and bacon and make sausages and margarine.

“This would have been circa the ’50s, I believe the ’60s, and it goes through the history of margarine. It was first manufactured in 1869. Things that you never thought you needed to know, but it’s amazing for trivia nights,” she says.

According to a Packinghouse Products manual collected by Harry, margarine was first produced in France at the Royal Farm at Vincennes. Napolean the Third, the president of France, awarded its creator, Mege Mouriez, for producing a “palatable table fat.” Mouriez mixed at least two, if not more, edible oils or fats with milk.

Along with the history of margarine, Teterenko says she also learned how to make sausages “more attractive and appetizing.”

She also discovered that the most common form of sausage casing is from sheep.

“I assumed it would have been pork, but it’s actually sheep casings because they are really tender and they can handle the different things put into the sausage, and they import most of those from

New Zealand and Australia, but a lot of it was local. So again, little things that you never thought you needed to know,” she says. 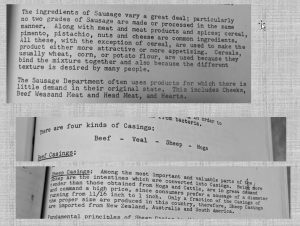 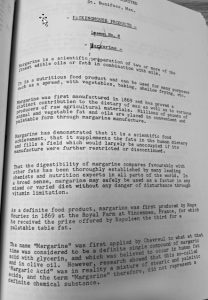 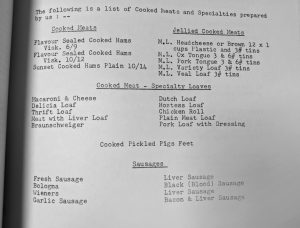 Even though the Stubbs collection is small, it is part of a group of collections, that document Alberta’s agriculture might. These collections include Alberta’s biggest players, such as Burns Meats, Calgary Packers, Jenkins Groceteria and Western Stock Growers.

And it’s those links between the big players—the producers and the retailers—and the workers, allows researchers to tell vibrant stories.

“They all were involved in the meat industry or the sales side of a very important industry in Alberta. Agriculture obviously was extremely important to the province, and so it’s neat to see how things are interconnected,” says Teterenko.

If you’ve enjoyed travelling down the rabbit hole with us, please consider subscribing to future posts.