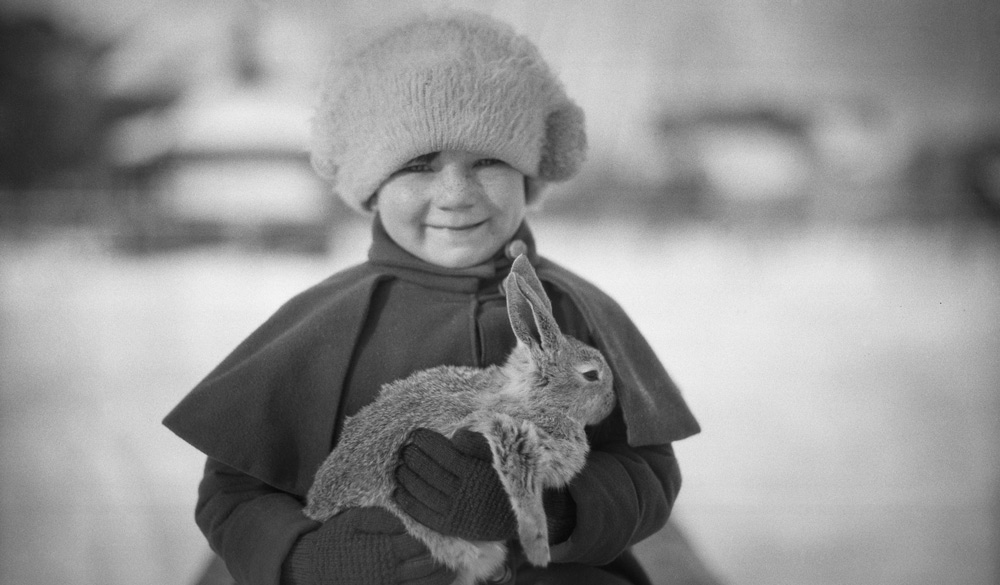 Down the rabbit hole: Part 1

Anyone who has spent time in an archive researching knows the joy of going down the rabbit hole.

Like Alice in Wonderland, as Alice descends the rabbit hole into an unexpected world, archival research is no different. You might start researching one topic and end up on an entirely different one wondering, “How on earth did I get here?”

That journey down the rabbit hole is a fantastic part of archival research as it brings with it the thrill of discovery.

And one of the great things about working with the Glenbow Library and Archives, along with its remarkable diversity and the incredible volume of material, are the limitless rabbit holes.

It’s something UCalgary archival staff discovered as Glenbow’s library and archival collections moved to university. Archivists, by nature, are curious people, so it’s not unusual for something to grab their attention and lead them happily down the rabbit hole.

But as there are too many rabbit holes among Glenbow’s materials to travel down together, what follows (in two parts) is a small sampling.

Part 1 of this journey down the rabbit hole shares The National Hobby and Trader, a newsletter that ran in the 1950s and a small collection of documents connected to Bob Edwards, editor of the Calgary Eye Opener.

Part 2, meanwhile, will explore meat-packing manuals from the Stubbs family collection and a photo album of two French dolls made for Princess Elizabeth and her sister, Princess Margaret Rose. 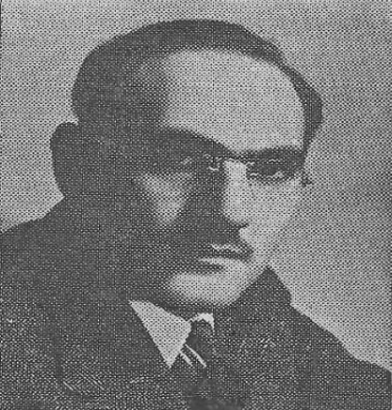 The National Hobby and Trader

The National Hobby and Trader, published by Leroy E. Brownlee, offered readers a little bit of everything. It carried anecdotes, book excerpts and advertisements, including personal ads submitted by people looking for love and companionship.

“It also dispensed folksy advice on tuning accordions something that Leroy knew something about because in his lifetime he had about a dozen accordions,” says Bonnie Woelk, an archivist with Archives and Special Collections at UCalgary. “But the main content of the National Hobby and Trader was lonely hearts personal ads, which can give us some insight into the search for romance 60 to 70 years ago.”

Born in the United States in 1891, Brownlee immigrated to Alberta in 1911. He settled west of Wetaskiwin, near Hoadley, where he established a sawmill and a feed-grinder in the 1920s.

In 1940, at the age of 49, he began operating a printing business that he called the Star Press.

“He wrote and printed four books on blacksmithing at farm lumber sawmills, and he sold these by mail,” says Woelk. “And he also printed flyers, handbills and posters for local businesses and organizations.”

About ten years into his printing business, Brownlee started The National Hobby and Trader with its personal ads. Brownlee published his newsletter, with its Canada-wide circulation, until 1958.

‘Have gas and electricity in the house’

Rather than seeking long walks on the beach, love-seekers in 1955 were pragmatic.

“Some men were actually quite forthright or straightforward in what they wanted,” says Woelk.

One bachelor, for example, wrote: “Alberta Roman Catholic, 40: I have year-round farm work and good wages would prefer ladies who have a farm of their own.”

A 43-year-old Manitoba bachelor, meanwhile, stated that he had a farm and “a full line of good farm machinery, fair buildings, hydro, good herd of cattle, total value of $40,000.”

This bachelor added that while he had lost some of his hair, he had most of his teeth. He didn’t smoke, was easy to get along with and a good worker.

It wasn’t just men who were seeking companionship and love, of course. The National Hobby and Trader included equal space for women. And like the men, they knew what they wanted.

Such as the “Canadian-Dutch Young Lady of 19: I am interested in an early marriage and wish to hear from fine, young men with means—preferably 20 to 26, would also like to meet some young men.”

Or the “Pretty B.C. girl of 23,” who wrote that she likes “hiking, hockey and baseball. I’m a non-smoker or drinker, and I don’t like jazz bands or jitterbugging.”

Many ads were from widows, and a number of those, says Woelk, were financially comfortable, including the Protestant widow from Ontario who wrote that she was 75 but felt like 45. She also had “valuable revenue-producing property” to offer, adding, “I would be pleased to correspond with good, true, honest, sincere Protestant gentlemen up to 75. I own three houses in town. Wonderful opportunity for a gentleman without a home.”

But not all of these widows who advertised in the National Hobby and Trader were in a favourable position. As Woelk points out, others, like the 38-year-old northern Alberta widow, were struggling: “I have five children, 7 to 15, and was on a farm until now. Would like letters from gentlemen, 38 to 50. Will answer all letters.”

“The National Hobby and Trader, in reaching the lovelorn across Canada and as far away as Missouri and Scotland, also featured some encouraging stories for those searching for romance,” says Woelk.

“One story was about a blacksmith who felt lonely, so he went to Edmonton, where he asked a laundry manager to introduce him to one of the girls in the laundry who ‘was also lonesome. So he stayed in town for two or three weeks to do his courting and came back with his new pretty bride.’ As easy as that apparently.”

So, what of Leroy E. Brownlee?

“He decided not to take the advice he dispensed. Or, he was unlucky in finding love through the personal ads because he remained single throughout his life,” says Woelk.

Many people living in Calgary know of the CBC Radio morning program, the Calgary Eyeopener. Few, however, are familiar with its namesake, the satirical newspaper Bob Edwards edited and published from 1904 to 1922. At its peak, the Eye Opener, with a circulation of 35,000, was the most popular newspaper west of Winnipeg.

Edwards used the Eye Opener and his quick, acerbic wit to fight for human rights, decency and the common good. And no one, including himself, was above his ridicule. He assailed injustice, politics and politicians, and his pointed attacks brought down more than one politician

Grant MacEwan once wrote that “Edwards wielded truth like a weapon.”

Allison Wagner, senior rare books and manuscript advisor for Special Collections, happened to spot a folder in the university archives after Glenbow materials began to arrive that bore the title “Bob Edwards.” 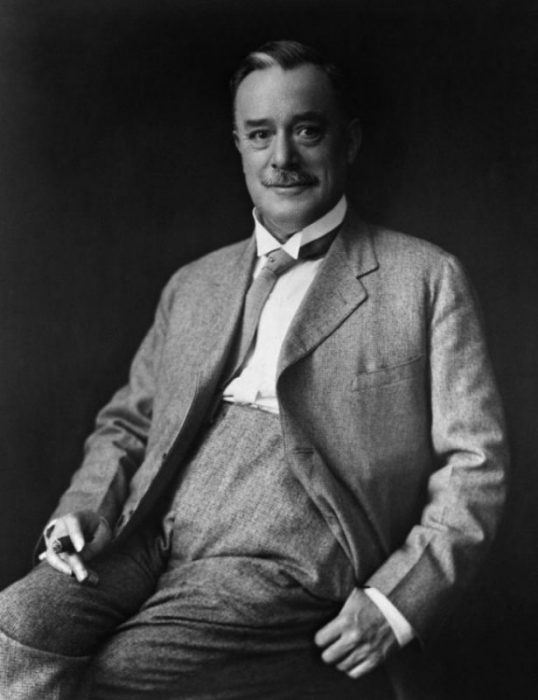 Nothing new under the sun

She stopped, recognizing the name from the CBC Radio morning show.

“I knew the name also because there’s a junior high school in the northeast named after him. There are, of course, the Bob Edwards Award that is presented to a maverick Calgarian every year, someone who we would call a disruptor. So, I took a quick look inside the folder,” she says.

“The first thing I found was the letter, and the letter had a doodle on it, and I am a sucker for doodles, so I was in with both feet.”

Edwards had written the letter to a friend, George Murray. Along with the letter, Wagner found a cartoon that shows Edwards sitting at his desk looking out the window upon Stephen Avenue Mall. An inkwell on the desk has the word “vitriol” written on it. The wastepaper basket is full of copies of the Eye Opener. Edwards, pointing at the streetcar, is saying, “It’s coming all right, all right.” At the bottom of the cartoon, it reads, “So is Christmas.”

“I don’t have the context for this particular cartoon,” says Wagner. “I don’t know if this was a comment on whether or not the streetcars were on time or constantly late. Or if it’s a reference to building the streetcar in the city, but when I ran across it last fall when there were people were shouting at each other with the green line, I thought there’s nothing new under the sun.” 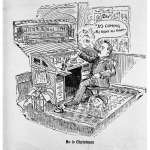 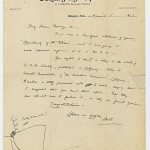 “Effectively, the Eye Opener died with him despite the efforts of some people to keep it going for a few years after that,” says Wagner.

“The Glenbow does hold seven small archival collections that are mostly letters and newspaper clippings file and several library books.”

The Glenbow Archives also has a few original copies of the Eye Opener in its collection. Despite its popularity, an entire run of the Eye Opener (some 500 issues) doesn’t exist. Edwards was a notoriously bad record keeper.

Please join us as we go further down the rabbit hole with Part 2 in two weeks. Subscribe for updates.